This weekend, Scott Walker announced that if reelected he will replace Common Core.  I’m sure the Common Core peddling Michael Brickman of the Fordham Institute is unhappy to hear that. Brickman was education adviser to Walker when Common Core was adopted. Brickman also did a song and dance at the NC legislature during the Common Core committee hearings.  I also had a chat with him on Pete Kaliner’s show on WWNC.

WISCONSIN DELLS (WKOW) – Gov. Scott Walker said Sunday he will move to replace the Common Core State Standards in Wisconsin in January if he is re-elected.

Speaking to media on a campaign stop in the Wisconsin Dells, Walker said he believes the Common Core guidelines do not provide state educators, civic leaders and parents with enough say in determining what children should be learning at each grade level.

“I think the people of the state should be in charge of decisions like that, not people from outside of the state,” Walker said.

Wisconsin seems to be waking up on Common Core. Jog on over to Indiana, and you’ve got Pence under the microscope for the rebrand he pulled in his state.

Governor Jindal is taking the fight to the Department of Education. I gotta admit, I’m not only impressed but inspired by what Jindal is doing there. Meanwhile in North Carolina, Governor McCrory’s statements all point to a pathetic rebrand scenario like Pence’s.  Keep listening to Teach for America and Eric Guckian and good luck in 2016, Governor. 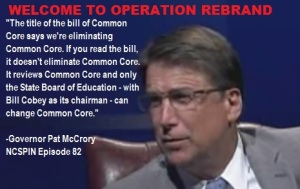 A.P. Dillon is a freelance journalist and is currently writing at The North State Journal. She resides in the Triangle area of North Carolina. Find her on Twitter: @APDillon_
View all posts by A.P. Dillon →
This entry was posted in Common Core, LL1885, Pat McCrory, The Articles and tagged Eric Guckian, Michael Brickman, Scott Walker, Wisconsin. Bookmark the permalink.