The Standards Who Must Not Be Named

Was Arne Duncan’s speech in Texas a tribute to Harry Potter?

It would seem so, as Duncan 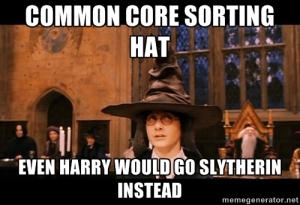 Valerie Strauss at the Washington Post has the full story, but asks, “Why wouldn’t Duncan want to actually mention the words “Common Core” when he is talking about the Common Core? Could it be that in some places the Common Core is becoming somewhat toxic amid growing opposition to the initiative from different parts of the political spectrum?”

A.P. Dillon is a freelance journalist and is currently writing at The North State Journal. She resides in the Triangle area of North Carolina. Find her on Twitter: @APDillon_
View all posts by A.P. Dillon →
This entry was posted in Common Core and tagged Arne Duncan, Common Core. Bookmark the permalink.
Loading Comments...