This is a little story of what happens when Liberals attack on Twitter.  Mind you, this has happened before but this time they took aim at my kids as a means of trying to get me to be quite.  So…Earlier today I was treated to how territorial liberals are over the hashtag #NCpol and how desperate they are to keep it one big incestuous link around.

Full disclosure – It started with a tweet I didn’t tag correctly with an MT instead of an RT. I tweeted an acknowledgement to the original complaining party, however that wasn’t good enough. Someone else decided I was going to be a pet project:

RT @jeannebonds4nc: @gwfrink3 introduce her to @timothypeck and report her. They both take RT and lie.@ladyliberty1885

Soon enough, I had people not even involved insulting me, attacking my choice to protect my kids by writing anonymously and in general wanting me to shut up and go away:

RT @jeannebonds4nc: @chadcnance @ladyliberty1885 the is the third time in 3 weeks a Mom is worried @ her kids so is anon. Answer:don’t tweet

She never did answer that. Instead, the person in question, one @JeanneBonds4NC, spammed me, with help from pal @ChadCNance, and then threatened to report me for bothering her. Turns out after spamming me and with me not taking it lying down, she decided to let me know she had indeed reported me.

Anyone following the tweet progression can see she beset on me and not the other way around.  And these people wonder why some of us write anonymously – if they behave like this on Twitter, imagine face to face? @ChadCNance is a big man with 75 followers who has had death threats and yet still jumps into conversations online of which have nothing to do with him. Yeah, I’ll take his advice right to the bank.

@ladyliberty1885 @jeannebonds4nc – That is a fairly lame excuse. I’ve gotten death threats for articles. Here I am with my name hanging out.

Yes, there you are with your name hanging out. Good for you! Cookie? I’m not doubting he may have received threats – who knows who stalks a man with 75 Twitter followers – but I don’t see him blogging about Unions, Jihad or Occupy. Groups which have given my email box a who new set of disgusting and disturbing new terms. 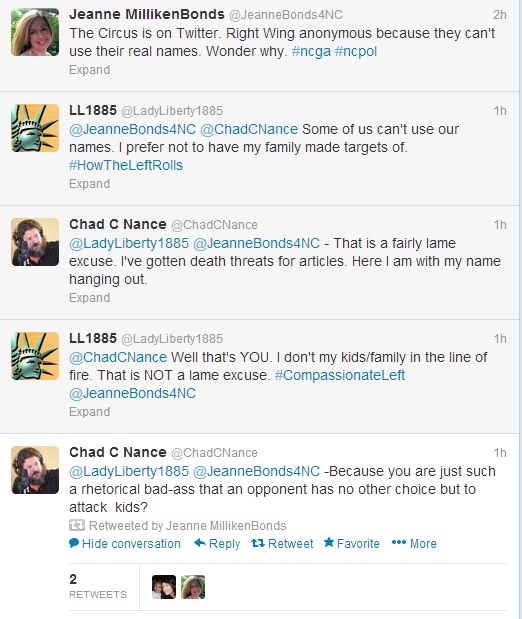 This is how the Left rolls – mocking someone for protecting their kids.

A bit of irony from @JeanneBonds4NC’s timeline around the same time she was spam tweeting me:

How does the story end? Well,  I’m not leaving. Figure it out.

A.P. Dillon is a freelance journalist and is currently writing at The North State Journal. She resides in the Triangle area of North Carolina. Find her on Twitter: @APDillon_
View all posts by A.P. Dillon →
This entry was posted in Left Leaning, LL1885, New Civility, POLITICS NC, Stay Classy, The Articles, THE LEFT, Useful Idiot and tagged Chad Nance, Jeanne Bonds, NCPOL, Twitter. Bookmark the permalink.