A former Craven County Public Schools teacher has been extradited to face a charge of forcible sodomy in York County, Virginia. 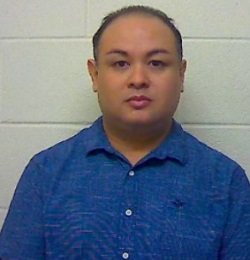 Frederick Andrew Angoco II, age 39, was taken into custody on Sept. 3 by the Craven County Sheriff on an outstanding out-of-state warrant on a charge of forcible sodomy.

Angoco was extradited to York County, Virginia on Sept. 17 according to official booking records.

Williamsburg police first received the report about the alleged crime in August. The following month, Angoco was arrested and remanded to the Craven County jail until he was extradited to Virginia in September.

The York-Poquoson Sheriff’s Office said the alleged crime occurred in their jurisdiction sometime in April of 2019 when Angoco was in the area on a “field trip.” The alleged victim is a 21-year-old man who lives in York County, Virginia.

According to Virginia statutes, “Forcible sodomy is a felony punishable by confinement in a state correctional facility for life or for any term not less than five years.”

This is not Angoco’s first arrest. He was also arrested in Havelock on Nov. 10, 2017, on a charge of simple assault.

From 2004-2006, Angoco was employed as a substitute teacher for the Craven County School District. He was hired full-time in 2006 as a music teacher for Arthur Edwards Elementary and was listed as a chorus teacher at Tucker Creek in 2017.

Craven County Public Schools confirms that Angoco was suspended from his position at Tucker Creek Middle School on Aug. 17. The district did not comment on whether the suspension was paid or unpaid.

Records show Angoco has an active N.C. teaching license in the area of K-12 music. His license was issued in July 2019 and, unless revoked, it will expire on June 30, 2024.

Angoco is the 23rd North Carolina teacher arrest tracked by this site in 2020.