According to recent conversations by members of the N.C. State Board of Education and Department of Public Instruction, the state’s explosive charter school growth is becoming an issue for how the state funds those schools.

Excerpt of the state board of education’s newsletter:

Unexpected shifts in charter school enrollments from 2020-21 to the current school year raised questions about the timing of funding allocations at this month’s State Board meeting.

Even with significant growth in the number of charter schools and the number of students they enroll during the last 10 years, legislation and policy governing the budgeting process for charter schools hasn’t changed since the schools were first launched, DPI’s Chief Financial Officer Alexis Schauss told the board.

The number of charter schools has doubled over the last 10 years from 100 to 200, enrollments in charter schools have nearly tripled during the same period from 45,000 to 125,000 and state funding has increased from $228 million to $822 million.

“It’s clear to the school districts, to the DPI and to the charter school community that we have kind of outgrown the way we are funding charter schools,” Schauss said. “When it was a 3% of the [student] population, the population was very stable, and the schools were much smaller.

“Ten years ago, we probably had less than 10 schools that were over 1,000 students. Now we’re probably at 35 schools. So, when they’re increasing 10% or 20%, it’s having a lot more of an impact on the school districts than it was before. Since 2012, when the cap was lifted, it has been increasingly evident each year that this is a topic that needs to be looked at.”

Schauss interestingly went on to add “It is not just for charter schools to look at or school districts or the legislature or the state board. It really needs to be looked at as a whole.”

For the last decade, legislators have been considering that the way North Carolina funds education needed to change. No one on either side of the aisle has wanted to actually touch it though. Over two dozen states are looking at funding students instead of systems. Will North Carolina finally act?

What Schauss said about looking at it as “a while” apparently didn’t register with board member James Ford, since he continued complaining about district funding.

State Superintendent Catherine Truitt was paying attention and apparently said that any adjustment in funding approaches is a “win-win,” and that “what we want to do is avoid fixing the issue with charter school funding in a way that will have a negative impact on LEAs.” By LEA she means Local Education Agency.

To play devil’s advocate to Truitt’s statement on LEA’s, many of them are not and have not been delivering, district policies related to COVID are regularly protested and district boards are proving tone-deaf to criticism regardless of topic.

Many LEA’s have openly stated opposition to charter schools, held back charter funds, and have tried to sabotage school creation applications with the state. Any negative impacts at this point for LEA’s are self-inflicted.

The COVID-19 reactions by the state, the districts, and the edicts from the governor increased the number of parents searching for school choice options in the state, including charter schools.

Charter schools have typically outperformed their district counterparts. The same was true during the pandemic.

Test data from the 2020-21 school year was unambiguous in the presentation of the results to the state board of education, which included steep declines in proficiency and career and college readiness across all End of Grade (EOG) and End of Course (EOC) assessments.

According to DPI’s data, only 45% of students passed end-of-grade tests during 2020-21.
The state math, reading, and science tests saw an overall proficiency drop of 13.4%.

Here is a shot of the math results presented to the state board:

And here is the data presented on reading assessment results: 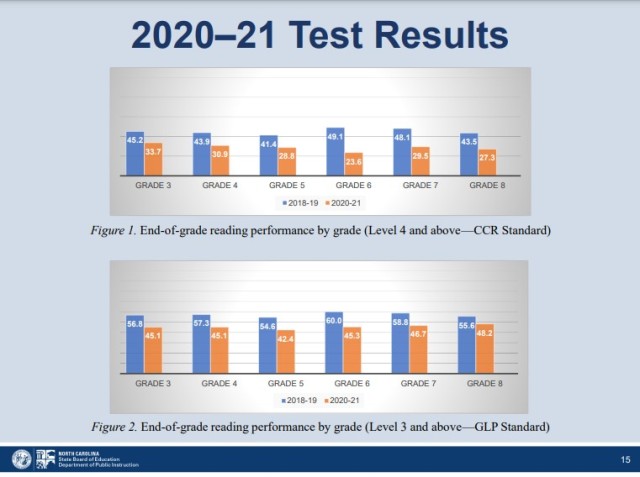 The Read To Achieve report presented to the state board in October was similar to the reading results previously shared, showing that kids in grades 1-3 were seriously behind in reading.

Charter school students, however, seem to have done better than their traditional counterparts.  Thanks for the data below goes to the NC Coalition for Charter Schools: 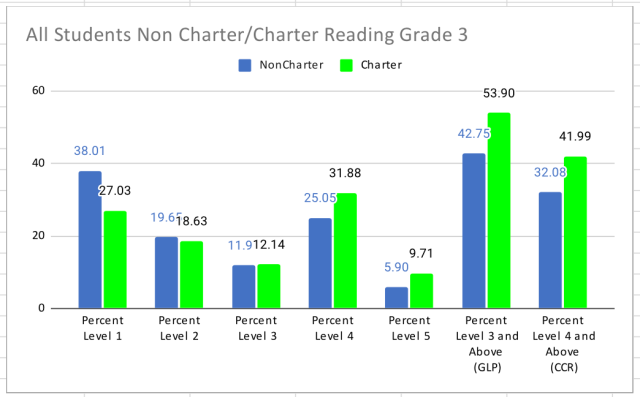 A.P. Dillon is a freelance journalist and is currently writing at The North State Journal. She resides in the Triangle area of North Carolina. Find her on Twitter: @APDillon_
View all posts by A.P. Dillon →
This entry was posted in A.P. Dillon (LL1885), Authors, EXCLUSIVE, NC Board Of Education, NC DPI and tagged Charter Schools, Education spending, School Choice. Bookmark the permalink.
Loading Comments...