* Updates are located at the bottom of this article.

Over the years, I have helped countless parents navigate the bureaucratic nightmare that is Wake County Public Schools.  Now it’s my turn.

On October 23, a parent sent me a screenshot of a letter from the principal at my own child’s middle school. The letter, dated October 18, indicated children were going to be subjected to a behavioral assessment and “rated” by a teacher.

“In our continuing efforts to support the well-being of all our students, we will administer a universal assessment of social, emotional & behavioral health. The assessment consists of a brief rating scale completed by your child’s second period teacher,” the letter reads.

I called the person listed on the letter as being responsible for administration issues for more information the same day I received the screenshot, Oct. 23.

The “social, emotional and behavioral” assessment in the letter is not named. The name of the assessment, the “BIMAS-2,” was only uncovered when I asked for the opt-out form. 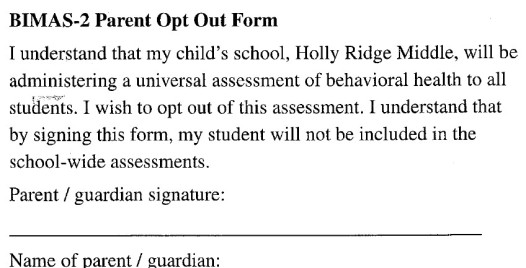 According to that form, parents only have until Oct. 30 to opt their child out of the assessment. I also found out that a pilot of this assessment was conducted on 6th graders in various WCPSS schools last year. A letter to Green Hope High School parents dated March 4, 2019 indicating 9th graders were being assessed in this pilot last year and that nine schools were involved.

When I asked about seeing the BIMAS-2 in order to ascertain what the children would be rated on, the individual responsible for collecting the opt-out forms told me that the assessment is entered online and that “it is not released to parents, per se.”

I was told by a school employee that this BIMAS-2 was going to be given quarterly going forward and would persist through the rest of the child’s K-12 career at WCPSS. In other words, the district is going to track our kid’s mental state every quarter and log it in a database.

I was also told there are implementation teams all over the district, although I do not know their names yet. I have asked the district for this information and a list of all schools this tool is being deployed in. I was told that Heather Lynch Boling of WCPSS and president of the North Carolina School Psychology Association, is involved somehow in coordinating all of these teams.

I did my own digging as usual and located the BIMAS-2 rating forms. I was horrified at a list of criteria that, at best, are highly subjective and transient topics such as has the child “fidgeted,” “lost his/her temper when upset,” and “was sent to an authority for discipline.” 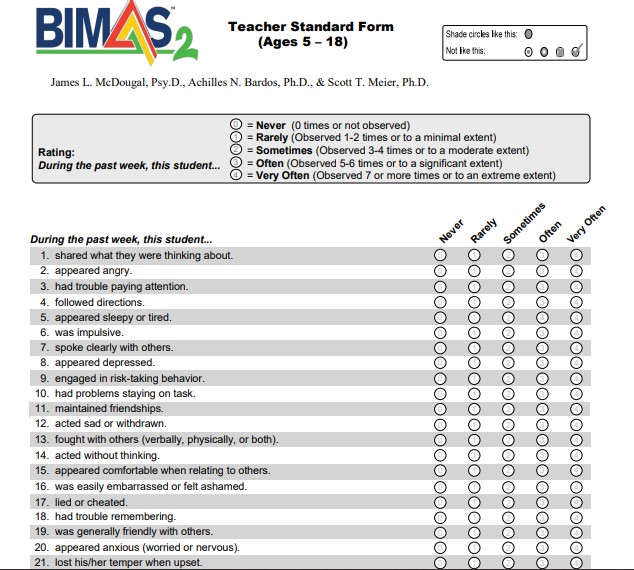 The full form above, which is labeled for the teacher to complete, can be viewed here.

The BIMAS-2 is the work of a University of Northern Colorado Professor named Achilles Bardos.

Those who have paid attention to moves made by the US Dept. of Education knows that federal and state educational agencies have been using laws like ESSA to chip away at parental rights and student data privacy laws.

While the intentions of the BIMAS-2 are likely good, the implementation is bad. This assessment is arguably creepy, has definite privacy-invading issues and being conducted by individuals who are not licensed psychologists.

What Starts Here Changes Everything… or something.

On Oct. 24, the very next day after I made my inquiry with our son’s school, the letter notifying parents of the assessment magically came home with my son. Two other parents contacted me that afternoon and said their children had also finally received this letter.

I followed up with our school’s principal and asked to him to facilitate letting me see this online assessment.

The principal responded by telling me that I “may already be aware that the assessment is a county assessment focused on Social and Emotional Learning.”

No, I wasn’t. I literally didn’t get the memo.

The principal also said he did not have access to the screener, but he “certainly can make sure” that my child is not included in the screening. He then directed me to complete the opt-out form, which was something I had stated I had already done in my first email.

I countered and asked again that he please set up a meeting for this coming Monday with whoever at the school at access to the BIMAS-2 tool. The response I got this time was “Tim Simmons is the contact discuss this district initiative with.” The principal also then stated he would not even be on campus on Monday.

At that point, I lost patience.  I demanded that someone make themselves available or direct me to someone who has access to show me the tool.

The response I received was similar to previous ones with one addition, that “no one will be available to fulfill your request as all information surrounding the screener is directed to Tim Simmons.”

At this point, I am wondering to myself how many parents didn’t even get the letter? How many parents did get a letter but have no idea what they are allowing their child to be exposed to because no information about this tool was included? How many did receive the letter and are asking the same questions I am? Are they also being stonewalled?

So, for those keeping score:

None of what I just enumerated is remotely OK.

WCPSS’ tactic of using district-wide dragnet to pull all students into this experiment is not OK either.

If the district wants to make this tool available to families who may have an at-risk student, great, go ahead and do that, but make it OPT-IN.

This district, and in particular the WCPSS School Board, has a proven track record of running right over the top of parents and it has to stop. Parents have been an afterthought if we are even considered at all. We should be the first thought.

Children belong to their parents and what starts with parents changes everything.

10-27-19
Since posting this article, I have received a number of copies of the parental notification letter. These letters are coming in from all over the district and are similar but not identical. The opening paragraph seems to be universal, but the rest changes.

The opt-out forms are all similar, but none of them include the BIMAS-2 label like the one our family received, which means those families have no idea what they are opting in or out of. Some of the letters have contact information directing parents to a “school representative” who can answer questions, others do not.

It would be a good idea for parents to be making copies of both the letter and the opt-out form. both before and after signing it. to keep for their own records.

One letter I received that was different from the “social, emotional and behavioral” assessment letters came from Panther Creek High School. This letter appears to be a totally different screening tool specifically used for detecting depression and is part of a suicide prevention program. With this letter, we see the district again using an opt-out instead of an opt-in method.

A.P. Dillon is a reporter currently writing at The North State Journal. She resides in the Triangle area of North Carolina. Find her on Twitter: @APDillon_ Tips: APDillon@Protonmail.com
View all posts by A.P. Dillon →
This entry was posted in Big Ed Complex, EDUCATION, Parental Rights, Wake County School Board and tagged BIMAS, WCPSS. Bookmark the permalink.