A Davie County teacher has been arrested and is facing 20 counts involving the exploitation of a minor. 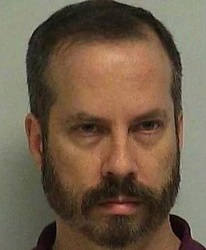 Charging and warrant documents show that Banks had filmed and had recordings of a minor engaged in sexual activity. The materials included multiple dates between May and July 2018. The minor was 11 years old when the activities started.

Banks worked at Shady Grove Elementary and his licensure information on file with the state says he was licensed as a Speech and Language Pathologist. His license was issued in 2016 and will expire in June of 2021.

The Davie County Public School district confirms that Banks has been on leave since January 22nd. The district also released a statement about Banks:

“Jason Banks, a Speech Language Pathologist with Davie County Schools, was arrested February 27, 2019 by the Davie County Sheriff’s Office. Mr. Banks has been on leave since Tuesday, January 22, 2019, and has not returned to work. Davie County Schools has fully cooperated with law enforcement at every step of the process; the safety of students is our top priority. We will continue to work closely with law enforcement and partner with parents and the community to maintain a safe teaching and learning environment for the students we serve.”

Families of Shady Grove Elementary received a message from Principal Sarah Maier, who said that the arrest did not involve any activity at the school, but did not specify if any students were involved.

“I am sorry to inform you that Mr. Jason Banks, a Speech Language Pathologist who has worked with our school, was arrested last night by the Davie County Sheriff’s Office.
The arrest and related charges do not involve any conduct that occurred at or related to Mr. Banks’ job or our school. Mr. Banks has been on leave since Tuesday, January 22, 2019, and has not returned to work.
We have fully cooperated with law enforcement and the safety of our students is our top priority. We will continue to work closely with law enforcement and partner with parents and the community to maintain a safe teaching and learning environment for the students we serve. If you have any particular concerns about this situation, please share them with me directly.
Again, I am sorry to have to deliver this news. Thank you.”

Two other Davie County teachers have been arrested and convicted involving images and electronic materials.

Shannon Wood was caught sending inappropriate photos to a student in 2016 using a phone app for images that is disguised as a calculator.  Wood was convicted for the dissemination of obscene material and her license was revoked on 2018.

In 2011, another teacher from Davie County was sentenced to 30 years on “federal charges of possessing, transporting and producing child pornography.” According to Journal Now’s report, Doug Ebersbach took photos of a naked 14-year-old student of his from South Davie Middle School.

A.P. Dillon is a freelance journalist and is currently writing at The North State Journal. She resides in the Triangle area of North Carolina. Find her on Twitter: @APDillon_
View all posts by A.P. Dillon →
This entry was posted in CRIME, EDUCATION, Quiet Epidemic and tagged Quiet Epidemic. Bookmark the permalink.