Over the weekend, the sign in front of the South Charlotte Middle School bore the message “F*ck Kavanaugh.  CMS Spokesperson called it “Fake news,” but they were in for a surprise.

A reader contacted me with an image that shocked, angered and saddened me. 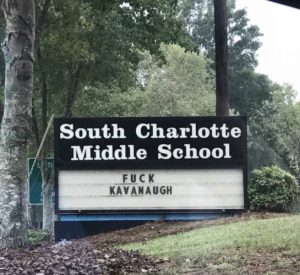 I hopped on Twitter to ask the Charlotte Mecklenburg School district (CMS) if they had seen this item yet or not. The CMS account responded swiftly and said it was “Fake News.”

The image tweeted by the CMS account above had been tagged with the name of the person who was using the CMS account at the time of the reply. That person was apparently Tracy Russ, who is the Chief Communications Officer, Charlotte-Mecklenburg Schools.

As it happened, Tracy Lundell, the person who took the photo, was unamused by Mr. Russ/CMS calling her photo “Fake News.”

I guess my son, brother in law and I were hallucinating yesterday morning around 10am then? We pulled in the parking lot and took pictures of the awesomeness!… Nothing fake about it! pic.twitter.com/hAUSgSoE6H

Another person named Brendan Bailey had also taken their own photo of the sign.

I took the photo at 9:47 am Sunday morning. By 1:30 pm, someone had removed the letters. The glass panel was obviously open for anyone to edit the letters.

Ms. Lundell also tweeted Mr. Bailey’s copy, which he had posted to Facebook.

@Brendan1963 and I were there yesterday morning at 10 and we both took pictures! Not Fake and pretty pathetic that anyone would say it was! pic.twitter.com/YD5b066Ps9

One would think the Chief Communications Officer at CMS would know to check facts before labeling it fake news.

Update: CMS Media Relations tweets that they have confirmed that the South Charlotte Middle School sign had been “defaced” over the weekend. Charlotte Observer also reporting Mr. Russ now realizes this was not a case of “Fake News.” 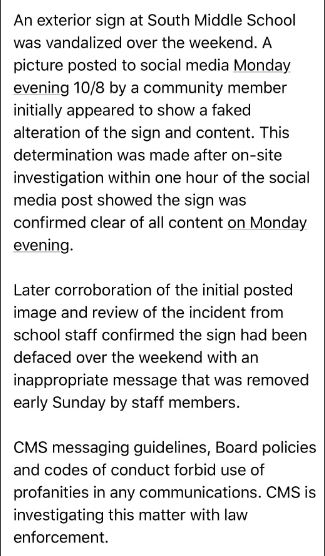 A.P. Dillon is a freelance journalist and is currently writing at The North State Journal. She resides in the Triangle area of North Carolina. Find her on Twitter: @APDillon_
View all posts by A.P. Dillon →
This entry was posted in A.P. Dillon (LL1885), CRIME, EDUCATION and tagged CMS. Bookmark the permalink.