Yesterday, this site reported on the WRAL affiliated NC Capitol Twitter account’s retweet of a Tweet by the North Carolina Democratic party:

Late yesterday afternoon, the NC Capitol account issued an apology, claiming the tweet was “a mistake” and “accidental”. The apology also claims that “neither reporter from NC Capitol was tweeting that night and it was a member of their “staff” instead.

The text of the apology blamed testing on an unnamed social media tool as the reason for the retweet.

It’s unclear what reporters use the NC Capitol account, however the two reporters who usually cover political news at the Capitol and General Assembly are Laura Leslie and Mark Binker.

After the Orlando terror attack, Leslie came under fire for controversial remarks made on Facebook. National media watchdog outlet Newsbusters picked up on Leslie’s multiple posts. 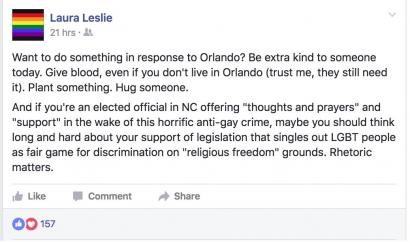 A.P. Dillon is a reporter currently writing at The North State Journal. She resides in the Triangle area of North Carolina. Find her on Twitter: @APDillon_ Tips: APDillon@Protonmail.com
View all posts by A.P. Dillon →
This entry was posted in A.P. Dillon (LL1885), EXCLUSIVE, Media Bias, Twitter and tagged media bias. Bookmark the permalink.