#HB2 Protesters Get Dramatic at School Board Meeting

According to the Star News Online headline, House Bill 2 (HB2) protesters “stormed out” of a New Hanover County School Board meeting earlier this week when the board didn’t respond to the public comments that were made.

At the end of the public comment session, some protesters angrily asked members, “what are you going to say to us?” Board chairman Don Hayes responded that the board had listened to them, then moved on to the rest of the agenda.

Hayes’ response drew cries of “shame” and “cowards” as the crowd emptied from the meeting room.

Star News Online has video of this ‘storming out’ and subsequent cries of ‘shame’, which feel rather awkward as the video jumps around and is clearly missing footage.  There was no ‘storming’. The crowd that came to protest got up, milled around and then walked to the door in no unusual fashion.

View the video; around the 30 second mark the ‘storming out’ and chanting begins.

What Star News Online apparently did not capture was the protester activity of targeting a board member during the meeting. That board member was Tammy Covil, who posted an account of what happened at the meeting to her Facebook page on July 13th.

Covil agreed to allow me to re-publish her comments.

I don’t usually comment about school board activities but since I was targeted by one of the protestors and both media outlets in attendance failed to report it, I’ll share details of the event to give you a better perspective of what transpired last night.

There were 7 people signed up to speak during the Call to the Audience regarding HB2 last night. What you must know is that during the call to the audience, we do not interact with the speakers. This is the public’s opportunity to address the board and
we generally don’t respond, we listen. 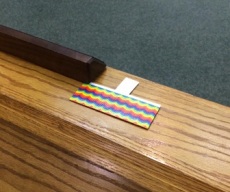 Image of the actual ‘rainbow mask’ slammed down in front of Covil.

As one of the protestors was speaking, a women broke from the crowd, approached my seat, slammed her rainbow colored duct tape mask down on my desk, snarled at me, and then stomped away.

Now, it’s not unusual for people to approach board members to hand out informational material while someone is speaking, so I was not aware of her intent until she slammed the mask on my desk. At that point, the deputies were much more guarded (thankfully). The speakers then became highly emotional and aggressive. It was clear their intent was to bully and intimidate the board until they achieved their desired result. When it didn’t work, they left in a huff chanting “shame, shame, shame” and making ridiculous statements like, “we’ll invite you to the funerals.”

Unfortunately, I’m used to tactics like these. It’s a consequence of having regularly exercised my free speech rights. They don’t have to agree with me. All I ask is for an opportunity to debate the issue. But what these people are trying to do is bully me and people like me into silence. FYI – I will never be censored, no matter how many rainbow colored props you throw at me.

Some advice one might want to consider when attempting a similar protest:

A. Everyone has the God-given right to free speech. What is not appropriate, however, is rude and aggressive behavior. You don’t need to act like a petulant child in order to get your point across. In fact, childish behavior denigrates your argument and undermines your message.

B. If those speaking in your protest plan to argue the importance of protecting individual rights and sheltering students from possible bullying and then proceeds to attempt to intimidate and bully a board into carving out special exceptions for a fraction of a percentage of students, please grab a dictionary and look up the word hypocrisy. Study it closely and make sure your group is not taking a hypocritical stance before making your protest.

C. If you tell the media you plan to duct tape your mouths shut in your protest, using masks made from duct tape is false advertising. You appear to be less willing to suffer for your cause than you’d like the public to believe.

A.P. Dillon is a freelance journalist and is currently writing at The North State Journal. She resides in the Triangle area of North Carolina. Find her on Twitter: @APDillon_
View all posts by A.P. Dillon →
This entry was posted in EXCLUSIVE, LGBT, LL1885, The Articles, You Will Be Made To Care and tagged HB2, New Hanover, Protest, Tammy Covil. Bookmark the permalink.

3 Responses to #HB2 Protesters Get Dramatic at School Board Meeting