The narrative that North Carolina teacher turnover rates are at an ‘all time high’ has returned.

WRAL wins the title of misleading lede of the week:

The fact is that teacher turnover barely ticked up from last year.

Since the adoption and implementation of Common Core, the rates have risen. This is, of course, is not a reason listed by DPI.

From the report, emphasis added:

Also from the press release:

State Superintendent June Atkinson expressed concern over the report’s findings saying, “In the past five years, the state’s teacher turnover rate has increased in all but one year (2013-14). We won’t reverse this trend until we address the root causes of why teachers leave the classroom.”

Root causes? Did she not read DPI’s own report? Perhaps not, seeing as it doesn’t appear to be very complete.

More from the report, emphasis added:

There are 28 reasons LEAs use to code their attrition data. For purposes of this report, the self-reported reasons teachers leave have been categorized into five summary categories. As reflected in the chart on page 6, teachers reported “personal reasons” as the main reason for their decision to leave the profession this year (2014-2015). “Personal reasons” includes individuals retiring with reduced benefits, individuals resigning to teach in another state, individuals dissatisfied with teaching, and family relocation. Family relocation was largely the reason most reported in this category this year (a total of 1,547 teachers). Over the past three years (2012-2013, 2013-2014, and 2014-2015), over 30% of teachers were reported as “turnover but remained in education,” which means they remained in the profession (teaching), however, have shifted from LEA to LEA within the state, teaching in public charter schools or moving to non-teaching positions in education (administrative roles, coaches, instructional facilitators, etc.).

View the chart on page 6, Turnover Reasons by Categories 2014-2015, as the above excerpt mentions.

Meanwhile, 982 were dismissed for one reason or another.

What’s also interesting in this turnover report  is what a colossal waste of NC taxpayer millions Teach For America seems to be:

Out of 139 Teach for America (TFA) Teachers employed in 2014-2015, 42 did not remain in the classroom (an approximate 0.04% loss of the total educator workforce). 25.09% of teachers reported were categorized as VIF teachers and 141 left the teaching profession.

Highest and Lowest Districts
According to the DPI report, the highest turnover was in Northampton County. Northampton is a relatively small county where, by last count in 2013, the population is somewhere just north of 20,000 people.

The average teacher salary supplement in Northampton for 2014-15 was only $1,225, which is less than 1/6 of the highest supplement which was Chapel Hill Carrboro Schools at $6,892.  Chapel-Hill Carrborro isn’t that big either and, as of 2013, had a comparable population number as Northampton.

Washington County schools was second behind Northampton. This is another small county with a population below 13,000 people. Their salary supplement was only $661.

Bertie County schools had the third highest turnover. Bertie is another small county and their supplement pay was only $780.

Rounding out the top five were Warren and Halifax. Both small counties again and both with miserably low supplemental pay.

Halifax has the distinction of having an average of $0 as their supplement. I’m surprised they aren’t number one in turnover. In fact, in 2014-15, Halifax was one of seven districts not offering a supplement, which is set by local school boards not the legislature.

Knowing why teachers moved from one district to another would be useful, but that data isn’t included.

Given the similarities I’ve laid out and taking into consideration the increases over the last few years made by the legislature (step pay unfrozen, bonuses, increased entry pay), one has to ask,  is teacher pay really still a ‘root cause’ for turnover? 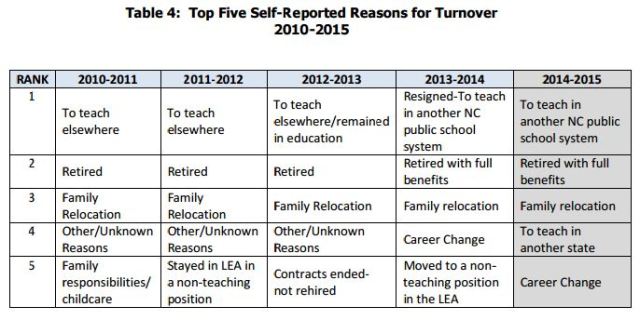 A.P. Dillon is a freelance journalist and is currently writing at The North State Journal. She resides in the Triangle area of North Carolina. Find her on Twitter: @APDillon_
View all posts by A.P. Dillon →
This entry was posted in EDUCATION, June Atkinson, NC DPI and tagged Teacher Pay, Teacher Turnover. Bookmark the permalink.