The content of his testimony, from the title of the written statement, centered on the reauthorization of the Higher Education Act. What his testimony was actually about was something else.

Upon reviewing his written statement, two sections jumped out at me.

The first one is Ralls seems to be implying that the federal government needs to further intrude into state sovereignty of education.

When you see terms like dual enrollment, keep Common Core in mind.  There is a massive behind the scenes ground game going on right now to align Community Colleges to Common Core. That alignment is worrisome enough, but Ralls also implies the fed needs to track the students:

Community colleges are uniquely positioned, in this regard, as what I like to refer to as the “seam in seamless education.” Wherever possible, I believe, Federal policy and legislation should encourage and incentivize implementation of dual enrollment pathways tightly connected with public schools, and strong statewide articulation agreements between community colleges and universities. Creation of a federal unit record system for Title IV eligible institutions would move us forward accounting for the reality of students moving across multiple institutions.

The other statement that caught my eye was one near the very end of Ralls’ statement and it references America’s College Promise Act:

It is also why our sector applauds the goals of the America’s College Promise Act, which notes not only the unique role of America’s community colleges, but more importantly makes the bold point that accessible postsecondary education beyond high school is today a necessity for family sustaining incomes. In conclusion, we know that America’s community colleges today have to be more than just a gateway to the American dream, we have to build clearer, more direct pathways to those dreams. Your consideration of these points in the reauthorization of the Higher Education Act will help clear some obstacles from those pathways of opportunity.

Ralls justifies the ACPA as a “necessity for family sustaining incomes“, yet the very funding of it will very likely mean a hit family incomes in the form of taxes.

The authors envision a federal investment of $79.7 billion over the next 10 years to provide free community college tuition to all eligible students. – American Assoc. Of Community Colleges

$79.7 billion over ten years… FROM WHAT REVENUE SOURCE?

The proposal is vague on the revenue source part:

The legislation provides mandatory, i.e., guaranteed, funding, but it is not “paid for,” meaning that no budgetary reduction or revenue increase has been identified to cover its considerable cost. Until an offset is identified, the legislation does not have a viable path to enactment. – American Assoc. Of Community Colleges

Nothing is free
The formula being used here is 75% Fed, 25% state.  Let’s round the estimate to $80 billion. Where are the states getting their share (roughly $400 million) of their $20 billion obligation from?

Mr. Ralls, on behalf of North Carolina’s Community College System, is supporting
this proposal yet his testimony does not mention where North Carolina would find this matching 25% in funds.

The ACPA represents an immediate boost to the revenue streams of Community Colleges nationwide. It’s also no coincidence that under Common Core, a large majority of students are going to land in one. 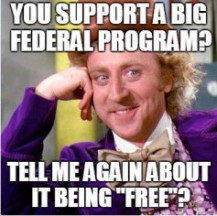 They are supporting a proposal that has no idea where it will get the money from and we know there will be data requirements and other strings attached — but it sounds great, right? Because…FREE!!!

‘We  want better access for all students’…
because, why the heck not when you can get other people can pay for it!  Free stuff!!

“Free Stuff”, like paying for college, that’s what some Occupy Wall Street morons asked for and that is what Obama, along with Hillary Clinton and Bernie Sanders, are now pushing for right before an election year.  Gee, go figure!
I can hear the drum circle now: This is what vote buying looks like!

The ACPA is Obamacare for education.  It makes tuition ‘free’ for low-income students and middle class students get a subsidy and the rest of us pay for it.

An appropriate quote to close with:

“Government’s view of the economy could be summed up in a few short phrases:
If it moves, tax it. If it keeps moving, regulate it. And if it stops moving, subsidize it.”
-Ronald Reagan

A.P. Dillon is a freelance journalist and is currently writing at The North State Journal. She resides in the Triangle area of North Carolina. Find her on Twitter: @APDillon_
View all posts by A.P. Dillon →
This entry was posted in Common Core, EDUCATION, Higher Ed, LL1885, The Articles and tagged America's College Promise Act, Community College, Free Stuff, North Carolina, Scott Ralls. Bookmark the permalink.