The Times News has one of those Q&A articles up that doesn’t address the real concerns, but goes with the tabloid angle. It’s shoddy reporting and media bias like this that makes the opposition want to bang its head on their collective desks.

Some examples from the article:

Q. Is this a federal takeover of the education curriculum?

A. No. The federal government did not write the standards, nor does it mandate that states adopt them. Common Core actually was spearheaded by a bipartisan, state-led effort by the National Governors Association and the Council of Chief State School Officers. The U.S. Department of Education’s Race to the Top grant competition did spur many states to reform curriculum and embrace Common Core. “It’s totally false that the Common Core is a product of the federal government or President Obama,” North Carolina Superintendent June Atkinson told The News & Observer last year.

“Totally false…”
Gotta drag Obama into it, because if you’re against the Core you’re against Obama. Heck, Rep. Brandon said that just the other day. Senator Parmon said something similar a month or so back too.

Get it? The message here is ultimately that you must be racist if you oppose Common Core. I wonder which proponent will be first to say it outright? Bets anyone?

Q. Then why are some conservatives opposed to it?

A. In the past year, Common Core has become a target of tea party groups and conservative talk show hosts such as Glenn Beck. He has focused on what he calls “scary” and “insidious” data collection of scores and other information from children. “They now have control of your children,” he warned his radio listeners. Others, such as GOP Sens. Ted Cruz and Rand Paul, call Common Core an overreach by federal education officials.

See, it’s those crazy tea party people pointing out that the standards are copyrighted by two D.C. trade groups and that states can’t control their own standards because of that. States received federal funds from Race To The Top, which was in turn funded by Obama’s stimulus package. But you know what,  that is just a CRAZY idea that Common Core might be considered federal overreach by any stretch of the imagination.

You know what else? They’ve collected data for years — just don’t pay attention to the fact Arne Duncan neutered the Family Educational Rights Privacy Act (FERPA) so that bigger, deeper data could be collected. Also, just forget that the testing consortiums tied to Common Core can take any and all of the data and sell or use it without parental consent.  Pay no attention to the breaches that have happened. It’s all good right? The powers that be will be able to track our kids from preschool to workforce, what could possibly bother anyone about that?

These two cracked me up:

Q. What about North Carolina?

A. It was one of the first states to sign on to Common Core, and it won a $400 million Race to the Top grant in 2010. That was used in part to train teachers for the new standards.

Q. So teachers had special training?

A. Yes, teachers attended summer training sessions leading up to the introduction of the standards last school year.

Now, if Dr. Atkinson can only tell us how much of the grant was really used. First she said $53 million, then she said $66 million.   Atkinson couldn’t tell the Common Core LRC what kind of training was given, by who and where either. Read more about that testimony fiasco with video here.

About that wacky math:

A. Because it is. The math standards move away from rote memorization and push students to think about why a particular answer is right. They also encourage students to pursue multiple approaches when figuring out a math problem. Some parents worry that the math standards leave out major topics in trigonometry and pre-calculus. Supporters argue that students will still learn algebra, geometry and advanced math, but that it’s built on progressions.

“Because it is”.  Yes it is and it’s fairly silly, if not detrimental, to teach a child who is a concrete thinker multiple methods requiring abstract thought while doing one problem instead of teaching them the nuts and bolts FIRST then down the road helping them see the WHY. This is what is going on in the elementary grades. Parents recognize the recycled “new math” from the 80’s, by the way Dr. Atkinson.  It was crap then and it’s crap now. Overly convoluted methods being taught to little kids is not rigor, that’s child abuse.

In the latter grades, we worry they leave out trig and pre-calc because THEY DO.  We’ve read the white papers, we’ve read the interviews, we’ve seen the evidence. Common Core math will set kids back at least two years and does not prepare kids for STEM careers. “Built on progressions” — translated that means your kid will have to do extra work and courses to get where they want to get to. 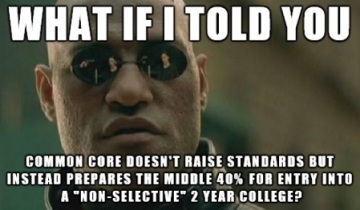 Q. I heard Common Core requires children to read books that are inappropriate for them. Is that true?

A. No. The only reading Common Core requires is the Declaration of Independence, the Preamble to the Constitution, the Bill of Rights and Lincoln’s second inaugural address. Some confusion comes from an appendix to the standards that includes dozens of titles meant to serve as suggestions for teachers looking for age-appropriate reading material. Those titles include books that some parents say are inappropriate and “pornographic.” But again, they’re not required.

Key term here is “not required”.  They may not be required but they are indeed recommended and are indeed being used. Some of them right here in North Carolina. If you are having trouble locating the NC required  reading or as the case may be “not required” reading list, that’s because you are not searching for “Text Exemplars“.   Read more here and scroll down to item five.

Unless you really know where to look, a typical parent would have trouble locating this item. I suspect that is by design. Navigating the search feature at the  NC Department of Public Instruction site is trying to sort a room full of pins. Useless.

Read appendix B to see the “not required” items. Appendix B is also useful for combating that pesky line we always hear from proponents, “It’s just a set of standards…” Bullcrap.

A.P. Dillon is a freelance journalist and is currently writing at The North State Journal. She resides in the Triangle area of North Carolina. Find her on Twitter: @APDillon_
View all posts by A.P. Dillon →
This entry was posted in Common Core, Shutuppery, The Articles and tagged June Atkinson, Shutuppery. Bookmark the permalink.
%d bloggers like this: