So we’ve got an American Idol runner-up attempting to run against Rep. Ellmers, “The hair” running against Rep. Pittman and now another unfortunately coiffed Democrat is apparently challenging Sen. Berger. Dear Mr. Osborne – The Beatles called, they want their haircut back. Add to the mix the recent Voller/Chavis debacle.  Wow. NC Democrats sure are on the win wagon these days.

Ok, so the latest Democrat to come out of the woodwork I listed above is William Osborne. He’s a shrink from Rockingham. Reminds me of Lurch a little bit – let’s hope he’s a tad more charismatic. On second thought, maybe Peter from Family Guy. 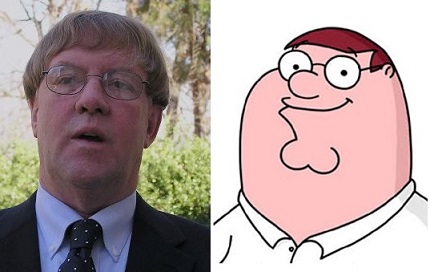 Osborne has the typical campaign site and Twitter account.  Anyway, he’s so excited about challenging Berger, he decided the best place to ask for help with his campaign would be the NC Blondes run by Jeanne Bonds of the famously failed Faison campaign. Hey, wonder how the lawsuit is going? 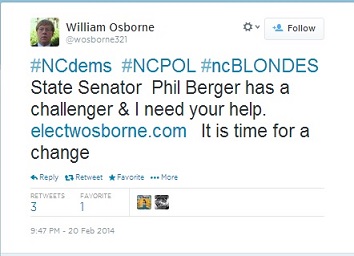 You remember the blondes — the ‘group’ of Twitter sockpuppets who sling insults in nearly every tweet? In case you missed a few posts, they are the foul-mouthed “democrat recruiters” who spent their Summer doxing Sister Toldjah and me. Osborne wants the pros! He’s already advertised his book on one of Bond’s sites, after all. Branding, ya’ll!

Much like the NCBlondes, Mr. Osborne seems to have a fixation on the Klan.

@zaibatsu @MovingNCForward Maybe next year the child can earn a KKK pointed hat.

Too much MSNBC will do that to a person. Sad really.

His Vote Smart profile is rather short. Osborne apparently wrote a book. The bio for the book is a chuckle; big claim to fame is he was once the Rockingham Democrat Party chairman.  Candidate Osborne answered a couple of surveys before – sort of.  Let’s ask some more questions:

Thank you to Carolina Plott Hound for linking!

A.P. Dillon is a reporter currently writing at The North State Journal. She resides in the Triangle area of North Carolina. Find her on Twitter: @APDillon_ Tips: APDillon@Protonmail.com
View all posts by A.P. Dillon →
This entry was posted in POLITICS NC. Bookmark the permalink.
Loading Comments...