A closer look at images from a June leadership event posted by the N.C. Association of Educators (NCAE) on its Flickr page reveal issues maintaining members and a slide on “power.”

The slide below is a bit hard to read, but an enlargement of the image makes the text clear:

The image on the right of the slide is apparently a history book. 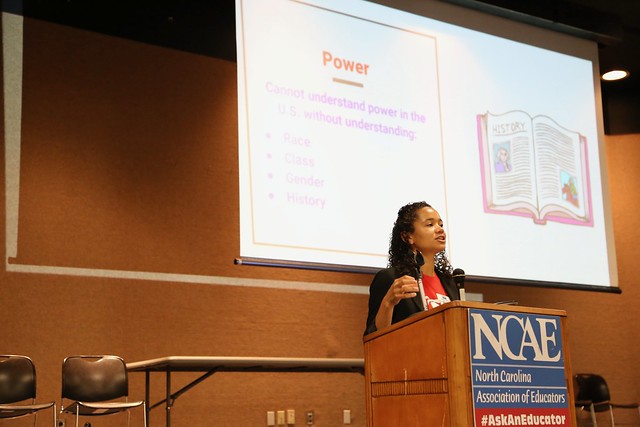 The annual conference by the NCAE’s parent organization, the NEA, was held in July of this year. At that conference, the NEA pledged to teach social justice, Critical Race Theory, and to use “anti-racist” materials.

NEA item number 18 brings CRT-themed “decolonizing the curriculum” and 'anti-racist' materials for teachers to use — in the classroom.https://t.co/ZDnUvfJ0E8#nced #crt https://t.co/5VOLPB6GRN pic.twitter.com/nX0G6n1rWH

Following that conference, dozens of NC teachers signed on to a petition vowing to teach Critical Race Theory and the controversial and historically inaccurate 1619 Project. One of those from NC signing the petition, which was started by the revisionist history organization The Zinn Ed Project, is NCAE President Tamika Walker Kelly.

Another image features Wake County NCAE President Kristin Beller. The slide behind her has a bullet point that reads:

“It’s become a lot harder for us to recruit and retain our members and it’s more important than ever to switch up our organizing strategies.” 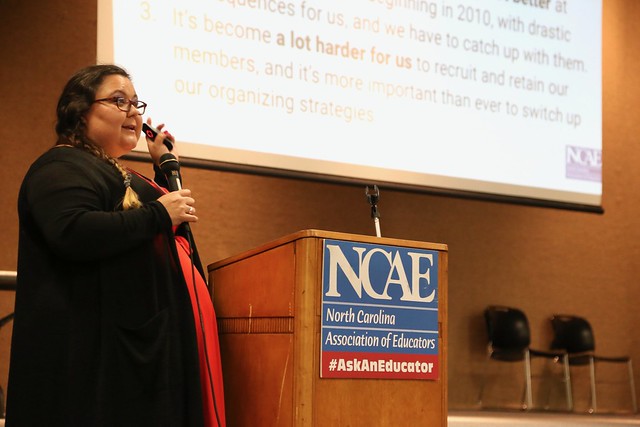 The NCAE has continually refused to report their membership numbers when asked each year by the N.C. State Auditor. As a result, the auditor has only been able to report on those members using payroll deduction. The numbers have decreased each year.

The most recent audit of membership levels by the state auditor revealed 5,996 payroll membership deductions for the NCAE. That’s down from 6,083 in 2019.

The NCAE’s Vice President Bryan Proffitt was featured in a photo depicting a “two year cycle” of political strategy and activity. 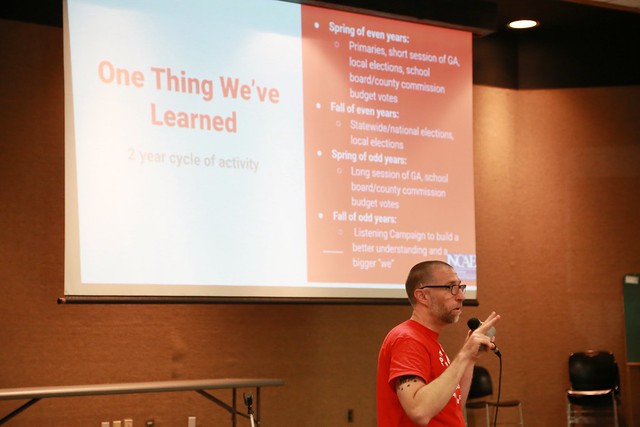 A.P. Dillon is a reporter currently writing at The North State Journal. She resides in the Triangle area of North Carolina. Find her on Twitter: @APDillon_ Tips: APDillon@Protonmail.com
View all posts by A.P. Dillon →
This entry was posted in A.P. Dillon (LL1885), Big Ed Complex, EDUCATION, NCAE and tagged Critical Race Theory, NCAE, NEA. Bookmark the permalink.
%d bloggers like this: