The Chair of the Robeson County GOP is really ticked off the state party leaders like Dallas Woodhouse for sending Robeson County election complaints into a “black hole” because of the NC-09 debacle.

The Robesonian reported that the complaints sent to the state NCGOP for District Court 16B Seat 2 campaign disappeared “into a political “black hole” and asks if the NCGOP “downplayed” the Robeson issues on purpose.

The 16b Seat 2 race was between Democrat Vanessa Burton and Republican Jack Moody and was certified this past Monday by the NC Board of Elections. We’ll come back to these two later, first, we have to deal with NCGOP leadership issues.

The article talks about ‘leaked emails’ in which Robeson County GOP Chairman Phillip Stephens questioned the “party leadership’s lack of action concerning complaints filed with them, and asks for guidance on what could be done in the wake of the certification vote.”

But that’s not all, it gets worse. Stephens grills NCGOP leadership about the complaints and affidavits they filed.

Stephens specifically asked about what their judicial candidate, Moody, is going to do when he appeals and “the case is weaker with NCBOE claiming they received no complaints.”

“Do we not have procedures in place for our legal team to pass along local complaints? Any suggestions?” asked Stephens according to The Robesonian.

And what was the response by ‘state leadership’? Blame shift.

The state party’s leadership team responded via email, “Would it be worthwhile to see if Nick Ochsner Wbtv is aware?”

Executive Director Dallas Woodhouse’s emailed response was, “The decision here is absurd. But it is political.”

These are not answers, they are deflections.

Back to the Moody/ Burton Details

The article goes on to say that Kim Strach, State Board of Elections executive director, told the NCSBE that two of McCrae Dowless’ people, Jennifer Boyd and Rhonda Strickland, collected 58 absentee ballots and some ballot requests in Robeson County.

The NCSBE was told about “the high number of absentee ballots requested in Robeson County — more than 2,000, according to lawyers for Burton and Moody. More than 1,100 were not returned,” according to The Robesonian.

Strach indicated she and her team investigated and found that most of the unreturned ballots didn’t return them, voted some other way, or were no longer at an address being used to send ballots due to Hurricane Florence.

A single complaint about a Democratic Congressional Campaign Committee going door-to-door was received and that turned out to be a voter registration drive.

Key to the Robeson GOP chair’s complaint that the files he sent to the state level leaders went nowhere is evidenced by Strach saying that other than the Robeson area door-to-door complaint,  the NCSBE “received no complaints or allegations of ballot tampering or ballot collection.”

What makes this worse is the reaction by the NCSBE and denial the events in Robeson were related to Dowless and NC-09. More from The Robesonian: 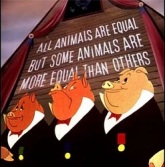 The impact of Dowless on the District 9 election was much more significant in Bladen County than in Robeson County, Cordle said.

The fallout resulted in the late certification of the judicial race.

“These parties (Burton and Moody) were caught up in the mess that was going on in the 9th District and were not part of it,” he said.

To sum all of that up, all elections are equal but some are more equal than others.
That’s not just on the NCSBE, that’s on Dallas Woodhouse and Robin Hayes too.

A.P. Dillon is a freelance journalist and is currently writing at The North State Journal. She resides in the Triangle area of North Carolina. Find her on Twitter: @APDillon_
View all posts by A.P. Dillon →
This entry was posted in A.P. Dillon (LL1885), ELECTIONS, POLITICS NC. Bookmark the permalink.