A report on the failings of districts to deal with school employee sexual misconduct published last September hit my inbox this week via a friend. Those who have followed my chronicle of the teacher arrests in North Carolina will want to check this one out.

The report is titled “A Case Study of K–12 School Employee Sexual Misconduct.” The subtitle is “Lessons learned from Title IX Policy Implementation.”

The report, commissioned by the Department of Justice, draws from a number of sources, all of which are from 2010 and earlier, going back as far as 2002. That says a lot about the lack of attention to what I’ve accurately dubbed the Quiet Epidemic.

The study focuses on incidents during 2014.  Specifically, the report looks at “five geographically and demographically diverse districts that experienced an incident of school employee sexual misconduct in 2014.”

The very first paragraph will come as no surprise to those who have been paying attention to my Quiet Epidemic series.

An estimated 10% of K–12 students will experience sexual misconduct by a school employee by the time they graduate from high school. Such misconduct can result in lifelong consequences for students including negative physical, psychological, and academic outcomes.

The report makes an important point early on in the first section, which is that there are  “no national surveys currently collect incident data on school employee sexual misconduct and there is no comprehensive, searchable national database to manage and track reported incidents.”

Without question, there should be.

The opening paragraphs go on to list the main points of Title IX guidance and requirements on the topic of school employee sexual misconduct:

I can’t think of a single item on this list that North Carolina can be considered to be approaching competent at.

Further along in the report, the findings show that few of the school districts they had in their sample were adequately following or enforcing any of the above mentioned key items.

Other key points in the report:

That last one on the list really gets me. These are ADULTS. They shouldn’t need to be told sexting with or raping their students is inappropriate behavior.  Then again, one of the sections in the report deals is titled “Younger teachers need more training.”

Here’s the part that really stood out to me, as I have documented such cases myself and it’s known as ‘Passing the trash’.

‘Passing the trash’ is when a school allows a teacher to resign without reporting them to authorities or their state education departments. This allows for that teacher to pick up where they left off in another district or state.

Many of the unreported cases were handled in unofficial ways; school administrators sometimes seek to avoid the consequences of reporting by entering into confidentiality agreements or negotiating private settlements with offenders (Shakeshaft & Cohan, 1994; Shoop, 2004; Stein, 1999).  Furthermore, collective bargaining clauses often allow for scrubbing of personnel files, so no record is left once an offender leaves the system. These practices, allowing known sexual predators to quietly leave the district, potentially to seek work elsewhere, have become known as “passing the trash” or “the lemon dance” (Hobson, 2012). With no criminal conviction or disciplinary record, predators can obtain new jobs—and move on to other victims. On average, a teacher-offender will pass through three different districts before being stopped, and one offender can have as many as 73 victims in his or her lifetime (GAO, 2010).

For more statistics on perpetrators, victims, types of misconduct, number of cases in 2014, demographics of the victims and more, see the infographic at the bottom of the page. The original can be found here.

Like him or hate him, James O’Keefe and Project Veritas exposed how Unions are able to force the scrubbing of personnel files. While Project Veritas didn’t catch sexual assaults being covered up, they did uncover various levels of corruption and the cover-up of physical assaults on students by teachers.

You can check out the various related Project Veritas reports here. 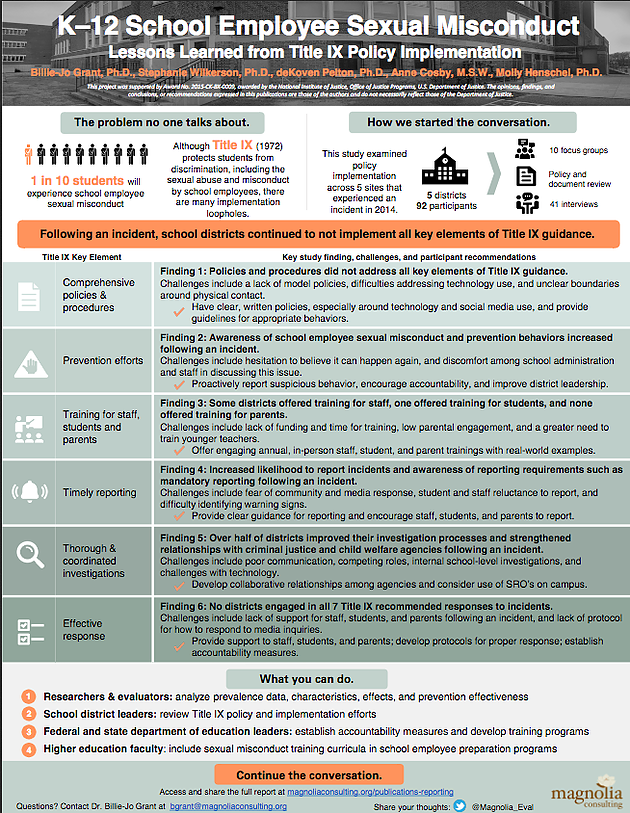 A.P. Dillon is a reporter currently writing at The North State Journal. She resides in the Triangle area of North Carolina. Find her on Twitter: @APDillon_ Tips: APDillon@Protonmail.com
View all posts by A.P. Dillon →
This entry was posted in CRIME, EDUCATION, Quiet Epidemic and tagged Quiet Epidemic, Title IX. Bookmark the permalink.

3 Responses to Report: 1 in 10 K-12 Kids Will Be Sexually Abused By A Teacher