This article first appeared at American Lens News on August 16, 2017

A woman who is a member of the Communist World Workers Party was arrested for participating in the destruction and vandalism of a statue in Durham Monday night.

Far left and radical groups with socialist and communist roots were also in attendance. Groups such as Triangle People’s Assembly, Industrial Workers of the World, Democratic Socialists of America, Black Lives Matter and the Antifa movement were also present.

The protesters who showed up on Monday said their purpose is to “smash white supremacy.” From the video taken, looks like some might have smashed some toes too.

Around 7:10 p.m. a woman using a ladder climbed the statue of a soldier and attached a noose around the statue. That woman would later be identified by witnesses as 22-year-old Takiyah Thompson.

Not one media outlet has questioned the magical appearance of a ladder and noose at a protest. That these items were on hand and ready possibly suggests premeditation.

Takiyah Thompson, a student at North Carolina Central University, was arrested at a World Workers Party press conference she was holding about pulling down the Durham statue.

Thompson was charged with:

The charges are consistent with state statutes on vandalism. Thompson apparently was released and was seen leaving the Durham County Jail a little before 6 p.m.

Thompson had spoken to ABC 11 prior to her arrest. In a video of the interview, Thompson equates Confederate soldiers to modern-day cops.

“I did that because I feel like it’s important to tear down these vestiges of white supremacy because white supremacy is something that we still live with today and as the statue says … um.. it’s dedicated to the boys who wear grey. And if we have an understanding of history, we know that today those boys wear blue. That statue plays a part in the overall system that keeps its foot on the neck of black people and all oppressed groups.”

The text of the ABC 11 article left out these comments, which are only found if one watches the video.

The Durham statue, which was of an unnamed Confederate soldier had a plaque which read,  “The Confederate States of America.”  It was dedicated to the city of Durham and had been there since 1924.

Others Take Credit for Durham Statue

Another protester, D’Atra Jackson tweeted out that she was the one who pulled down the Durham statue.

2. It was a community effort. But it was a BLACK QUEER WOMAN that actually put the rope around the neck of the Confederate statue!!

Jackson appears to have affiliations with Black Youth Project 100 (BYP100) and Black Lives Matter. It’s unclear if she affiliates with the Communist World Workers Party or the other radical groups in attendance.

Jackson’s tweet taking credit for pulling the Durham statue down came in a series of tweets about the scene. Some using what some might consider offensive language.

4. Niggas wouldve had to literally wait 16 years or a magical veto, to get rid of any Confederate statues in the entire state!!

Jackson is referring to Senate Bill 22, titled, the Historic Artifact Mgt. and Patriotism Act. The act became law during the 2015-16 session of the General Assembly and protects monuments and statues from being arbitrarily removed unless the removal met certain specified criteria.

Criteria for removal or temporary relocation include preserving the object or when construction or renovations of adjacent buildings are ongoing.

Other criteria are if an object of remembrance is “owned by a private party that is located on public property and that is the subject of a legal agreement between the private party and the State or a political subdivision of the State governing the removal or relocation of the object.”

The object can also be removed if it poses a threat to public safety such as being deemed structurally unsound.

The councilwoman is cited by ABC 11 as weighing in on the Durham statute situation:

“I’m unlikely to support any city or county regulations that restrict the rights of free speech and free assembly for demonstrators,” Johnson said.”

A teacher of Thompson’s at NCCU, Aoki Debarge LeFlare, posted a message to Instagram asking for donations for a “legal defense fund” and listing a 501(c)3 called “Southern Vision Alliance” as the place to send them.

Johnson is also the person of record for the Durham Solidarity Center, according to the NC Secretary of State. Both of these organizations are offshoots of another non-profit named Action for Community In Raleigh (ACRe).

ACRe’s non-profit status lapsed sometime last year and after American Lens’ article about them, it appears they briefly rectified it with the NC Secretary of State.

These detailed filings are not linked off of ACRe’s charity profile or corporate profile. Anyone searching for them in the document filings or corporate filings will not find them.

The full filings for ACRe mentioned in the bullet list above are now only found if you know the right link, which American Lens saved after accessing on 7/17/17.

These above-mentioned documents were originally included in the group’s profile. They appear to have been moved after American Lens inquired on 7/21/17 about issues with missing documents.

Despite their lapsed status extending into December of 2016, ACRE’s sub-groups solicited donations for Black Lives Matter bail during the outbreak of violence in Charlotte last year.

Southern Vision alone lists multiple dependent organizations. Each one has solicited money to be funneled through the Durham Solidarity Center.

All of these groups, including the communist World Workers Party appear to be housed or at one point were housed at the Durham Solidarity Center.

Southern Vision Alliance and Loan Tran, Director of the Youth Organizing Institute were mentioned in a November 2016 meeting agenda of George Soros’ Democracy Alliance. The mention of the two groups was listed under ”˜forging stronger alliances’.

Tran is also the apparent spokesperson for World Workers Party and organizer behind the Durham statue protest. Tran told news outlets ABC 11 and WNCN that she was just “an organizer.”

Multiple socialist, anarchist and communist groups were in attendance but Tran appears to have been the only visible organizer at the protest judging by video and photos circulating on social media.

Tran is seen in nearly every video from local North Carolina outlets both during the Durham statue vandalism and at the arrest of Thompson.

Despite appearing in multiple photos and videos, Tran has not been identified directly by media outlets as being the main organizer of the Durham statue vandalism.

Not just a "group" ABC 11. NAME IT. It's a communist group, World Workers Party.
This is their spox. #ncpol https://t.co/ewzvb78UuT pic.twitter.com/HFqZ9NQkNO

Only brief mention has been made that Tran is an actual member of the World Workers Party in local media reports.

No outlet has identified the World Workers as a communist organization, but the Durham Sun did report on the collection of extremist groups that were in attendance.

A Durham Sun photo captures Tran on the left below, but the caption at the time for the photo said Tran “refused to be identified.” 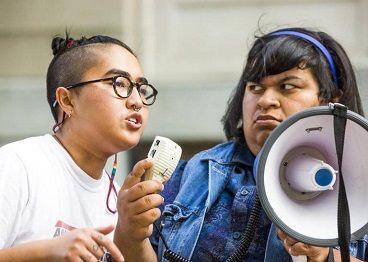 The full caption at the Durham Sun reads:

A protest organizer, left, who declined to be identified, and Eva Panjwani lead a group of about 100 protesters in chants during an ‘Emergency Durham Protest’ in front of a Confederate statue at the old Durham County Courthouse in response to the violent protests Saturday in Charlottesville, on Monday, Aug. 14, 2017, in Durham, NC. The group later pulled down the soldier statue and proceeded to march to the site of the new police headquarters under construction. Casey Toth ctoth@heraldsun.com

A.P. Dillon is a freelance journalist and is currently writing at The North State Journal. She resides in the Triangle area of North Carolina. Find her on Twitter: @APDillon_
View all posts by A.P. Dillon →
This entry was posted in Am Lens, CRIME, POLITICS NC and tagged Durham Statue, World Workers Party. Bookmark the permalink.