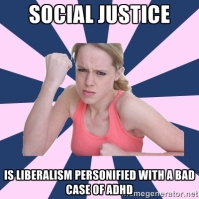 Earlier this week, I wrote about how social justice is crowding out actual academics and our tax dollars appear to be funding these endeavors.

I highlighted an individual that is an Asst. Superintendent of Curriculum and Instruction in the Kirkwood school district in Missouri, named Bryan Painter.

This article is a little more exploration into Dr. Painter’s social justice agenda.

Take a look at the Storify article from 11/12/15, which highlights the ridiculous social justice warrior events and calls for “safe spaces” that took place at Mizzou University. The very first link in it is to Southern Poverty Law Center’s incredibly biased and Common Core aligned ‘Teaching Tolerance‘.

I do not see a follow up article from Dr. Painter outlining that Melissa Click was charged with assault, was suspended, that she had a prior history of instigating incidents with police or that, as of yesterday, was fired for ‘harming the rights of others’.

No, that wouldn’t be in Dr. Painter’s Storify collection, because it doesn’t fit the narrative.

A new Civil Rights Team has formed at Keysor, comprised of interested fifth graders working with several Keysor teachers. When we think of civil rights, our minds often go straight to issues of race. This is important to our work, but looking at their pledge to each other we see their mission is much larger:

“I believe that Keysor’s diversity is its strength. I also recognize that treating others badly because of their differences can turn diversity into a source of loneliness and hurt. I pledge to have respect for people whose abilities, beliefs, culture, race, ideas or other characteristics are different from my own. To fulfill this pledge, I will examine my own biases and work to overcome them. I will set a positive example at home, school, and in my community. I will work to uphold the civil rights of every student at Keysor and interrupt hate and injustice whenever it occurs.”

This Civil Rights Team will also be leading the charge on “no name calling week”. One has to ask, does this include the designation of name calling free “safe spaces”?

Again, your tax dollars are funding these social justice pushes.

One of the biggest issues in education is that people tend to believe we have to spend more and more money in order to support our schools.

This stance is ignorant of the history of education spending in this nation, which has proven without a shadow of a doubt that spending more money does not equal more success. What is has equaled is stagnation, bloat and misspending. School districts historically have been poor stewards of the tax payer dollar.

Bottom line, school districts, like any government organization, need to be held accountable. They don’t need to exponentially spend more, they need to spend smarter.

A proposed tax increase was voted down by 60% of voters last November in Kirkwood, Missouri. The voters spoke pretty loudly there — the budget needs a haircut, not an opportunity to turn into Crystal Gayle.

As a result of that vote, the Kirkwood board voted to reduce their budget by $5 million.

Some of the reactions to the increase being voted down were, at best, examples of name calling. Ironic. Maybe Dr. Painter should sic the new “Civil Rights” team on that commenter who, by the way, is a “journalist” and author… who has a huge Chez Guevara background on his Twitter page.

When discussing these budget cuts, remember, Dr. Williams is Kirkwood’s Superintendent and  is one of the highest paid in the state at around $264,000 a year. Williams  was the one who recommended Dr. Painter.  Apparently the average teacher salary there is $70k.

So, in a nutshell, the Kirkwood board listened to the taxpayers, but not by choice.

Here’s a question or two for the Kirkwood Board:

Do the citizens have to come out in droves like they did at the polls for you to listen to opinions from the taxpayers?

The same taxpayers who fund these school officials pushing social justice and these ‘diversity’ programs?

Shouldn’t programs like these be part of that budget haircut so that actual academics can be the focus as they should be?

A.P. Dillon is a freelance journalist and is currently writing at The North State Journal. She resides in the Triangle area of North Carolina. Find her on Twitter: @APDillon_
View all posts by A.P. Dillon →
This entry was posted in EDUCATION, LL1885, Narratives, Poltical Correctness, Racial Justice, Social Justice, Storify, The Articles, You Will Be Made To Care and tagged Bryan Painter, Kirkwood Missouri, Social Justice, Taxes. Bookmark the permalink.