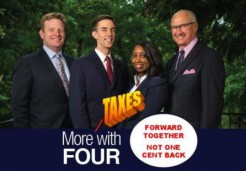 The Wake County Commissioners certainly are on a roll lately.

First it was shifting from their campaign promises that education spending was their top priority to transit being their big hair deal.

Now they are taking up the long debunked ‘wage gap’ myth.

RALEIGH
Shortly after the White House moved to address the income gap between men and women, Wake County leaders say they want to do the same.

Members of the Wake County Board of Commissioners on Monday said they want to find a way that the government and community can help ensure that women achieve the same academic and professional success as their male counterparts. Their comments came after hearing a report that the income gap in Wake County is worse than the national average.

Way to revive a long debunked myth, Wake County Commissioners! You’re about a year behind the news cycle, there guys.

If that article has just WAAAY too many words for the Commissioners, perhaps video is more their speed:

A.P. Dillon is a reporter currently writing at The North State Journal. She resides in the Triangle area of North Carolina. Find her on Twitter: @APDillon_ Tips: APDillon@Protonmail.com
View all posts by A.P. Dillon →
This entry was posted in A.P. Dillon (LL1885), Government and tagged Wake County Board of Commissioners, WBOC. Bookmark the permalink.
Loading Comments...