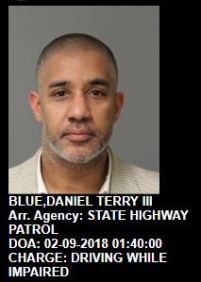 The son of a major Democrat at the NC General Assembly was arrested for DUI on Friday at around 1:40 pm.

Not only is Dan Blue III the son of a sitting NC state house senator, he also ran for state treasurer in 2016. He was the former chair of the Wake County Democrats.

So where is the news?

The NC media has issued zero stories on it as of 9 a.m. this morning.

Why? He’s a Democrat and the son of a prominent Democrat.
If this was the son of a Republican legislator, we’d have wall-to-wall coverage by now.

One would think it was newsworthy that the son of a Democrat #ncga Senator who was a former candidate for NC Treasurer was arrested in the middle of the afternoon for DUI.

A.P. Dillon is a reporter currently writing at The North State Journal. She resides in the Triangle area of North Carolina. Find her on Twitter: @APDillon_ Tips: APDillon@Protonmail.com
View all posts by A.P. Dillon →
This entry was posted in A.P. Dillon (LL1885), CRIME, Media Bias, NCGA. Bookmark the permalink.