During the annual Amplify Choice conference held in Denver this year, participants were given access to two charter schools in the Green Valley Ranch area; Strive Prep and DSST Public Schools.

Chris Gibbons, the founder of Strive Prep, spoke to the conference participants and listed some impressive statistics. Gibbon’s noted their combined campuses are found in three city regions in Colorado. There are 11 of these schools which serve around 3,650 students.

Gibbons said that Strive Prep schools have an “equity agenda”.  According to the Strive literature that was distributed, Strive Prep believes that, “equity is different than equality”.  The literature stated that, “An equity agenda is built on what is just; those who need more, get more.”. 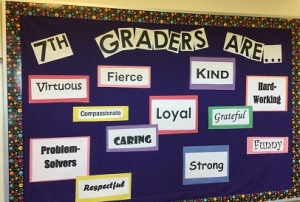 According to the presentation given on Strive Prep, their population is made up of 97% students of color and 87% are low-income students.  Impressively, Strive Prep’s first senior class had a 92% acceptance to four-year college.

Strive Prep at Green Valley is a middle school serving  students in grades 6, 7, and 8 and was founded in 2012.

There are roughly over  360 students enrolled. The school is currently headed up by Principal Jessica Savage.

The school was rated as a “Distinguished – Blue” school on the DPS School Performance Framework (SPF) in both  2013 and 2014. Based on the 2014 SPF, Strive Prep’s Green Valley location is one of the top ten secondary schools in all of Denver Public Schools. 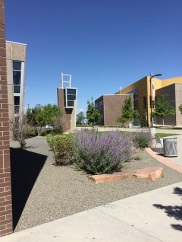 DSST has both a Middle School and a High school at the Green Valley Ranch location.  Conference attendees spent time at the high school.

According to DSST’s website, attendees of their schools rank in the top 10% of ACT scores in the state and have an astonishing 100% acceptance rate to four-year colleges.

Similar to Strive Prep, DSST’s campuses serve a high percentage of minority students; 53.2% are Hispanic or Latino and 18.6% are African-American.

DSST CEO, Bill Kurtz, gave a brief presentation on the DSST network of schools which had a focus on “the human condition”.  Kurtz’s presentation turned a bit touchy-feely and stressed that, “each human being strives to be fully known and affirmed for who they are, and to contribute something significant to the human story.”

When first arriving at the school, a staff member engaged the group and was asked about Transgender policies for facilities and if there had been any issues with it.  The staffer responded and side-stepped the question slightly saying that, “we believe every student should be known and valued for their identity, so that would be honored in the gender group they were placed in.”

In Kurtz’s opening remarks, he said that, “our schools are hyper-segregated” and yet minority students make up over 71% of the student body of DSST Public Schools. Only a little over 18% of students are white or caucasian.

One highlighted item was that DSST encourages internship programs in an effort to help kids figure out what they like and don’t like. Down the road, this has shown to decrease wasted time at the college level for students.

DSST engages in a high degree of transparency in their operations and publishes financial reports for all their locations online.

DSST schools are considered to be some of the top performing STEM (Science, Technology, Engineering, and Math) schools in the nation.  According to their website, the DSST Green Valley location has been, “Ranked #1 high school in Denver every year while open, since 2012, based upon the School Performance Framework”.

A.P. Dillon is a reporter currently writing at The North State Journal. She resides in the Triangle area of North Carolina. Find her on Twitter: @APDillon_ Tips: APDillon@Protonmail.com
View all posts by A.P. Dillon →
This entry was posted in Charter Schools, EDUCATION, School Choice. Bookmark the permalink.

2 Responses to #AmplifyChoice: A Look at Two Denver Charter Schools