Oh, so now the HB 2 narrative is about the horrors transgender children face?  How about the horror of a young girl going into a shower at a gym and being assailed by a man who would have had the legal right to be there under the Charlotte ordinance?

Thompson seems to be under the impression that we should all feel bad for the miniscule number of transgender children out there who are horrified by using the bathroom that corresponds to their biological sex.

Sure, I feel bad for them being confused or scared. However, Thompson’s article is less about those kids and more about employing a shaming tactic at the expense of common sense, not to mention welfare, comfort and safety of everyone else’s children in the state.

All children deserve love, support and protection, which is why HB 2 was necessary to reverse Charlotte’s dangerous and illegal ordinance.  It protects ALL children. ALL citizens.

Had it been a proposal for unisex accommodations in addition to single sex, we wouldn’t be having this debate. But it wasn’t and it was never intended to be. The Charlotte ordinance was about pushing social justice and progressive wish lists on the public.

This article seems to assert that the welfare, comfort and safety of the vast majority of children and women should be overridden by a extremely small minority who suffer from a DSM-IV classified disorder?

By ‘extremely small’, I mean  a national population of 51,359 transgender people out of around 300 million people. Evenly divided for the sake of argument, that’s 1,027 per state. Transgenders are .7% of the 2.3% identifying as Gay or Lesbian according to  National Health Interview Survey (NHIS).

The claim has been made in the lawsuit filed against HB2 that these few individuals require therapy such as using opposite sex facilities like bathrooms, locker rooms and showers.
Are we to then assume the state’s citizens are supposed to engage in a state-wide therapy session?

I am all for respecting another person’s needs and wishes. However, where does the line get drawn?

What’s next? Can one register oneself as cat if one identifies as feline? Where are the facilities for those identifying as feline? That’s not a joke. That’s a serious question.

Their Secretary of State profile is here.

Their legal name is “Action for Children North Carolina”.

They are largely funded by Z. Smith Reynolds Foundation to the tune of close to a quarter of a million dollars since 2009. Other contributors are the John Rex Foundation and Ann Casey Foundation. 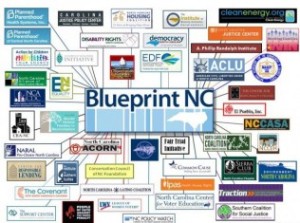 Both the Rex Foundation and the Ann Casey Foundation regularly contribute to George Soro’s Tides Foundation.

Z. Smith Reynolds  is the primary supporter of Blueprint NC whose purpose is to ‘Cripple, Slam, Pressure and Eviscerate’ Republicans in the state.

Make no mistake, this outfit is on the Left. View their Mapping The Left profile, which includes their major players, partners and funding.

View all past 990 filings at Propublica.

Of note on their staff is Adam Sotak, a former organizing director for Democracy NC,  affiliated with Triangle Jobs with Justice and has the distinction in April 2013 of being Moral Monday arrestee. View his Mapping The Left profile.

A.P. Dillon is a freelance journalist and is currently writing at The North State Journal. She resides in the Triangle area of North Carolina. Find her on Twitter: @APDillon_
View all posts by A.P. Dillon →
This entry was posted in BlueprintNC, LGBT, LL1885, The Articles, You Will Be Made To Care and tagged HB 2, NC Child, Rob Thompson, Transgender. Bookmark the permalink.