“I don’t anticipate a huge change in standards…I think there may just be some tweaking of the [Common Core] standards,” Markley noted in an interview Tuesday. – Port City Daily 7/23/14

“There were other issues rolled into it, like Race to the Top, which required some federal funding…and testing was ramped up at the same time, so it created some angst,” he said. “And I think some were concerned with…the loss of local control in education.”
– Dr. Tim Markley, New Hanover Schools via Port City Daily 7/23/14

Loss of local control. Keeping parts of a copyrighted set of standards that are controlled by two unelected and unaccountable D.C. trade groups would continue to support a local loss of control.
NC citizens did not have input into the adoption of these standards and SB 812 represents the rejection of them.  Our state officials, with these statements, are in effect trying to mute the voice of the people.
Don’t let them. 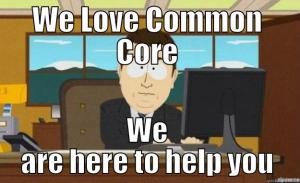 The public needs to be vigilant and make sure that rebrand doesn’t happen.

Get involved! Submit candidates for the commission to Sen. Phil Berger and Speaker Thom Tillis. Make sure the public’s interest on getting rid of Common Core is well represented! Don’t stop there though, when the commission is appointed we need to be watching them like a hawk.

A.P. Dillon is a freelance journalist and is currently writing at The North State Journal. She resides in the Triangle area of North Carolina. Find her on Twitter: @APDillon_
View all posts by A.P. Dillon →
This entry was posted in Common Core and tagged Jeff Pruden, Rebrand, Tim Markley. Bookmark the permalink.