At its Nov. 15 meeting, the Warren County school board unanimously voted to hire Sutton, who will begin with the district on Jan. 1, 2023. The contract with Warren County will run up through June of 2025.

“I feel like my years of working as an education consultant, advocate, legislative liaison, community organizer, and policy maker, in addition to my years of service as a member of the Wake County Board of Education, have all led me to this moment and this opportunity in Warren County,” Sutton said in the Warren County Schools press release.

Sutton had drawn criticism for serving simultaneously on the Wake County School Board and as Warren County’s interim superintendent since May of this year.

“Mr. Sutton has done an excellent job over the past four and a half months in Warren County, making recommendations and decisions that have significantly impacted our students and staff for the better,” said Warren County School Board of Education Chair Jennifer Sims in a press release. “With his long standing track record of educational service and advocacy, we’re excited to have Mr. Sutton’s leadership and experience working to benefit our families and the Warren County Community.”

Superintendents have to have certain credentials in order to be hired in North Carolina. Sutton apparently completed an “Urban Superintendents Academy” set of courses spanning nine months that the School Superintendents Association offers. That means he had to be planning the move to Warren long before that district brought him on an interim superintendent this past July.

Sutton joined the Wake County school board well over a decade ago in 2009 as an appointee and has been re-elected to the seat multiple times.

In 2016, the education data outfit BestNC quietly put Sutton on its board with the title of “Excellence Director.”

In 2014, Sutton made headlines for wearing a Black Lives Matter t-shirt while launching into a long speech comparing himself to Eric Garner, a then-43-year-old Black man who died after being placed in a chokehold by NY Police in July of 2014.

Garner had been confronted by officers for selling illegal cigarettes and the incident was caught on video, which went viral.

Video of that 2014 Wake County School board meeting where Sutton gave his speech has disappeared from the district’s YouTube channel.

During the 2020 election cycle, Sutton lost in the Democratic primary for state school superintendent. Of the five candidates on the primary ballot, Sutton came in second with 303,592 votes. The winner, Jen Mangrum, received 378,396 votes. Mangrum went on to lose to Republican Catherine Truitt by over 148,000 votes in the November General Election.

In related news, this past week the Wake County school board also voted to extend Superintendent Cathy Moore’s contract by another year up through June of 2025.

Moore, who was hired in 2018 following predecessor Jim Merrill’s abrupt departure, is currently making $299,280, not including any bonuses. The vote was 8 to 1, with member Karen Carter as the only “no” vote. 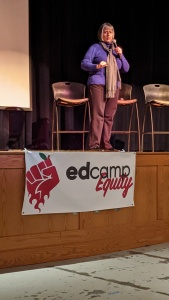 Moore was a keynote speaker at an event called “EdCamp Equity” in February of 2020.

The event was packed with sessions about “whiteness in Ed spaces,” which specifically talked about  how to shut down parental “pushback.”

The reporting this website did on EdCamp Equity made national news when Christopher Rufo used it to kick off his multi-part series exposing Critical Race Theory in K-12 schools.