#WCPSS Updates: A $450k settlement, thermostats and a substitute defends herself

The first installment of Wake County Public Schools (WCPSS) updates for 2020 covers a massive settlement payout, classroom temperatures, and cleanliness and a substitute speaks to defend herself out at the most recent board meeting.

A family of a special needs child (Shao-Ku Liu, age 19) filed suit against the district claiming that a teacher had illegally restrained and secluded their child.  This allegedly happened at Southeast Raleigh High School, which is one of the WCPSS board’s sacred magnet schools.

WCPSS is paying $450,000 to settle the lawsuit, which alleges that during the 2018-19 school year students with disabilities at Southeast Raleigh High were abused physically and were isolated in a storage room.  The storage room claim is backed up by staff member reports, which included both video and photos of the room in use.

Disability Rights laws in North Carolina state that schools can use seclusion or restraint as practice, the use of such measures has to be reasonable and it is not allowable to seclude a student as a disciplinary action.

According to court documents, Liu’s parents found bruises on their son’s body, which they sent photos of to WCPSS administrators. The family’s attorney Stacey Gahagan said no one from the district returned the family’s request to investigate. According to a report by the News and Observer, the district denies they ever heard about the claim prior to receiving the lawsuit.

“The district was unaware of the allegations prior to the parent’s petition. After the allegations were made, Special Education Services provided mandatory training for all teachers at the school who work with students in self-contained classrooms,” WCPSS Director of Communications Tim Simmons said.

At the center of the case is former WCPSS teacher Marcus Campbell. Apparently, Campbell departed employment with WCPSS at some point after the family complained and was then hired by Durham Public Schools.

Campbell has been suspended with pay by Durham Public schools pending an internal investigation per WRAL:

“At no time this school year have any concerns arisen regarding that employee’s conduct with students or staff,” Durham schools spokesman Chip Sudderth said in a statement. “However, DPS Human Resources is proceeding with a thorough investigation.”
[…]
WRAL News reached out to Durham Public Schools Thursday to see if the district was aware of the settlement involving Campbell, and the spokesman said he would check with the HR department. On Friday, he announced the teacher was no longer in the classroom as they investigate.

Liu’s parents have a long list of questions for the State Board of Education, WCPSS, Durham Public Schools about how and why Campbell was hired by Durham: 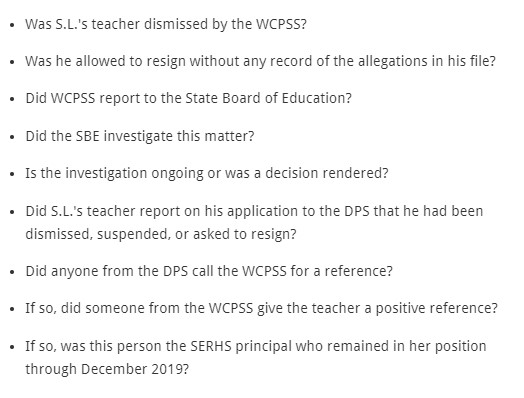 My suspicion is Campbell was allowed to resign and he floated off to Durham. This is what is known as ‘pass the trash,’ wherein a school or district lets a problem teacher resign, that teacher then is hired elsewhere and the district or former school doesn’t tell the hiring school or district anything about them.

Remember, the WCPSS board chose to freeze/fry our students and teachers and cut classroom cleaning. This board blamed the legislature for its inability to work within a $1.9 billion budget. Now, temperature control and cleanliness make a comeback. Why?

Did they find magic money in the budget? No. It’s an election year and the intended pain these cuts were supposed to inflict on the legislature never materialized. The public saw it for what it was: mismanagement.

One family, in particular, said Temple had “targeted” their son, according to WRAL. Nathan Byrd said Temple “basically targeted me,” and she said, “‘If y’all keep doing what you’re doing, you’re going to go to jail’.”

Byrd allegedly stood up in front of the class and said, ‘So, you’re basically going to predict my future that hasn’t even happened yet?'” Bryd also claimed Temple mentioned President Trump, but so far Byrd is the only student to have made either claim.

Temple resigned from her position but has maintained that Byrd’s account is not true and referenced a rebuttal letter she submitted to local paper The Johnstonian News.

“I assisted Rev. William Barber with some concerns of the NAACP … I joined the NAACP as a dues-paying member. I attend Rev. Dr. Martin Luther King Jr. breakfasts and events each year,” Temple said.

The paper had originally reported Temple denied she made such remarks.

“I completely deny the allegations and accusations made by a parent and put into the media without any comment from Wake County Schools or me,” Temple wrote in a letter to the WCPSS officials.

According to the report, Temple said that, “The eight students were yelling, arguing, talking, but I never brought up race myself. I simply answered his question.”

Interestingly, I never corrected their behavior, never fussed, never said a word, when a student told them to shut up and stop, I said ‘No, it’s OK, let them say what they want to.’ I sat there in my seat, never got up to call office, just made sure all the class stayed safe,” Temple said.

The Johnstonian News also reported that Chair Jim Martin and the board had “applauded Rand Road students and staff’s handling of the alleged incident.”

2020 is an election year for all nine Wake County School Board seats.

A.P. Dillon is a freelance journalist and is currently writing at The North State Journal. She resides in the Triangle area of North Carolina. Find her on Twitter: @APDillon_
View all posts by A.P. Dillon →
This entry was posted in A.P. Dillon (LL1885), EDUCATION, Wake County School Board and tagged Quiet Epidemic, WCPSS. Bookmark the permalink.

1 Response to #WCPSS Updates: A $450k settlement, thermostats and a substitute defends herself