#WCPSS Updates: Supt. pay is raised while special needs kids have no buses, plus MVP Math, Reassignment draft delays and who is watching the kids?

It was a busy week or two in Wake County Public Schools.

Topics this week include the Superintendent getting a pay raise while special needs students still have no transportation. Also, touching base on MVP Math, fees for records requests and a question: who is watching the kids?

“Wake County school board is planning to reward Supt. Cathy Moore with a 5% raise & a contract extension to June 2023 based on her 1st year on the job. Her base salary will rise to over $280,000 a year,” tweeted Keung Hui of the News and Observer.

The Wake County school board is set to reward Superintendent Cathy Moore with a 5% raise and a contract extension to mark her first year on the job.

The board is scheduled to vote Tuesday on a contract amendment that would raise Moore’s salary by more than $13,000, with part of the money going toward deferred compensation. Her contract would also be extended by two more years through June 2023.

The raise means Moore will have a higher salary than new Charlotte-Mecklenburg Superintendent Earnest Winston, who was hired in August with a base salary of $280,000.

And why is she being rewarded? Hui writes that the board gave the nod to the raise after “an annual review of Moore’s performance” citing accomplishments like “voter approval of a school construction bond referendum in November, an increase in the high school graduation rate and more schools meeting growth targets on state exams.”

The public will not know what goals have been given to Supt. Moore because, as we learned with Supt. Merrill, goal lists have been classified somehow as “personnel file” items, therefore are non-public records. In short, the public’s money is used to pay this employee but we are not privy to how they are being assessed.

#2 – Special Needs students in some schools still have no buses

A letter was sent out to parents of Special Needs students in August telling parents at 61 schools that there would be no transportation available for them.

The letter informs parents they will have to drive their child to school and that they will be reimbursed at the federal rate for mileage to do so.

Since the 1st day of school…

And no one’s been fired. #nced pic.twitter.com/HUMRRXeruO

This lack of Special Needs busing comes after the Wake school board requested $4,964,143 in March for “unanticipated transportation expenses for the 2018-19 school year.”

The Wake school board also requested an additional $3.5 million dollars to cover transportation for around 4,200 special needs and homeless students.

A few things to note with regards to special needs busing are that apparently, the district contracts with multiple different companies to provide this busing and according to a report in March by the News and Observer, this busing costs around $20 million a year, each bus has a safety monitor in them, and changes were being made to the contracts for these buses.

According to the article, “Wake made changes to the contracts this school year, including altering the way it pays the companies and taking over responsibility for drawing up their routes. Wake has to pay a premium rate to the companies to provide more vehicles than contracted.”

Neter told the News and Observer that some of the companies previously hired likely won’t be asked back for the 2019-20 school year and that the school board would vote on the new contracts.

This incident should be remembered the next time the board complains that public charter schools don’t all offer transportation. Charter schools are not given the capital outlay for buses like traditional district schools are and yet with millions given to them, this board has been unable to provide transport for some of the district’s most vulnerable students.

The Wake school board’s first draft presentation to reassign students based on a “socioeconomic index” created by Wake schools staff was delayed.

Draft 1 will now be presented on October 1 and Draft 2 was pushed out to November 5.
The public hearing on this plan will be November 19, the week right before Thanksgiving break and the final vote has been pushed back to December 3rd. 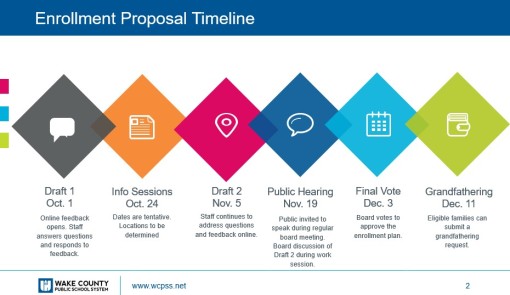 The school board is calling this move an enrollment policy change and have mentioned a “grandfathering” period, but it looks and feels more like a student reassignment plan given they intend to force some students to attend schools other than their base school.

This plan was hatched at a WCPSS board retreat where members discussed their ‘diversity plans‘ and announced ‘resegregation’ was not going to happen on their watch. Here is a verbatim copy of the resolution they produced, read it closely:

This resolution spearheaded the current fast-tracked effort to revamp the district’s assignment policy using a “socioeconomic index” to give a score to each district school. The socioeconomic index is drawn from the Wake County Economic Health Index.

The Economic Health Index includes median household income, food stamp usage, rent, and home mortgage rates as a percentage of household income and the number of people living between 100%–200% of the federal poverty level.

The district proposes that schools maintain an Economic Health Index within a certain percentile of the County average. Elementary should be within 20 percentile points and Middle and High schools 15 points.

According to the staff report, 30 (26%) of elementary schools, 14 (37%) of middle schools, and (12) 42% of high schools are presently outside of the district’s proposed goals.  Given the first draft has been pushed back, it still remains unclear just how the district intended to make schools comply with these goals.

The WCPSS socioeconomic index looks very similar to that of the College Board’s plan to send colleges an “adversity score” comprised of an SAT test-takers economic and social backgrounds.

The College Board announced at the beginning of September that it was abandoning sending this adversity score to colleges after receiving heavy public criticism.

According to a news release, The College Board’s Environmental Context Dashboard will no longer display a single “score” combining high school and neighborhood information and the dashboard has been renamed to “Landscape.”

“The idea of a single score was wrong,” The College Board’s Chief Executive Officer David Coleman told the Associated Press. “It was confusing and created the misperception that the indicators are specific to an individual student.”

Swapping kids around from school to school in the name of diversity has become more prevalent. A must-read on this trend is The Federalist article, Public Schools Revive Racial Segregation In The Name Of ‘Diversity’.

The Federalist article astutely notes that districts like Wake County who are trying to re-sort kids in this manner are actually using the absence of white students in their calculus and are themselves the ones engaging in segregation.

Another related article is Adams: New York City Has a Plan for Completely Integrating Its Schools. Great. Now Can We Talk About Why Kids Aren’t Learning?

Parents have been protesting MVP Math in Wake County for the better part of 2019. One parent who has lead the charge is Blain Dillard, whose advocacy for his child and protesting has led to the curriculum company to sue him for defamation.

MVP Math hit Dillard in July with what is known as a Strategic Lawsuit Against Public Participation suit or SLAPP suit for short, of which the purpose is to silence a person or group.

On Sept. 9, Dillard and his lawyer hit back.

“It is alarming that a parent would be sued for defamation for expressing opinions and making truthful statements about his son’s high school math curriculum,” said Dillard’s lawyer, Jeffrey Hunt of Parr Brown Gee & Loveless in a statement.

“The lawsuit appears to be an attempt to silence Mr. Dillard and other critics of MVP, and to chill their First Amendment rights to speak about MVP’s services,” said Hunt. “We believe the lawsuit has no legal merit and we intend to vigorously defend the right of Mr. Dillard, as well as other parents, to have a voice in the education of their children.”

The press statement includes a website called parentrights.net where information about the lawsuit are posted.

In the meantime, Wake County’s school board is dumping more money down the MVP hole in the form of more training with a new contract to pay OpenUp Resources, an MVP Math partner, up to $150,000 to train teachers on curriculum for middle school math.

OpenUp Resources was originally called the K-12 OER Collaborative and has received millions of dollars in grants from the Bill and Melinda Gates Foundation. One of my colleagues has a great article at Missouri Education Watchdog about this connection.

Last week, an 8-year old was locked out of Sanford Creek Elementary School after being told to head to a van that usually takes her home only to find no one outside and no van.

This week, two third-graders at Holly Grove Elementary during recess took off and trekked to a McDonalds almost two miles away from their school. The kids were not missed until the students were back in the classroom.

Principal Sarah Simmons has decided that only the kids are to be disciplined.

“I will be determining appropriate disciplinary action to ensure that the students understand the severity of their actions. Please take a moment to talk with your children about following school rules and staying safe. Our staff will use this as a learning opportunity to continue to improve our supervisory practices,” Simmons said according to WRAL.

The WRAL report also said that the McDonald’s was nearby and around a mile away.
That’s not accurate. This school is in my town. It is not “nearby” and it nearly 2 miles away in an area that would require these two kids to cross or travel on major thoroughfares.

The routes below are Google suggested. The recess area is at the back of the school which means the kids likely headed out south, through a neighborhood and ended up somewhere on S. Main street/route 1101. That road is fast-paced, two-laned and heavily traveled.

#6 – WCPSS moves ahead with charging for records requests

At the board meeting on Sept. 17, the board moved forward with an addition to their public records policy that will impose a “special service charge” on records requests taking eight hours or longer to fulfill.

Either a $15 clerical fee or a $25 an hour supervisory fee will apply. It is still not totally clear if the board will charge both fees in some situations.

Board members said that the charge will be applied under “limited circumstances” but did not enumerate what those circumstances would be.

A.P. Dillon is a reporter currently writing at The North State Journal. She resides in the Triangle area of North Carolina. Find her on Twitter: @APDillon_ Tips: APDillon@Protonmail.com
View all posts by A.P. Dillon →
This entry was posted in A.P. Dillon (LL1885), EDUCATION, Wake County School Board and tagged Busing, MVP math, WCPSS. Bookmark the permalink.

1 Response to #WCPSS Updates: Supt. pay is raised while special needs kids have no buses, plus MVP Math, Reassignment draft delays and who is watching the kids?