Two of the four protesters who vandalized and pulled down the Silent Sam statue on the UNC-Chapel Hill campus in 2018 were given a 24-hour jail sentence.

Jimenez and Birchfield-Finn were found guilty, but instead of a possible 45 days incarceration, Judge Lunsford Long sentenced them to just 24 hours in jail, with an additional 18 months of supervised probation, and 250 hours of community service.

The pair also was handed a $500 fine and ordered to pay court costs.

Of the sentences, Judge Long said: “There have to be consequences.”

The charges against Fuller and Aucoin were dropped. Judge Long indicated there was not enough evidence to support their presence at the incident.

A fifth person, Margarita Sitterson, was also charged in the Silent Sam case but her case was not heard with the others. Sitterson, who was a UNC freshman at the time of her arrest, is the granddaughter of a former UNC Chancellor J. Carlyle Sitterson (1966-1972).

Birchfield-Finn faces another misdemeanor charge of possession of a weapon on courthouse or state property. On the morning of the sentencing, Birchfield-Finn walked through the courthouse’s metal detector with a 3 and a half inch Buck knife in his pocket and was subsequently arrested.

Fourteen people were arrested either before, during or after Silent Sam was torn down by protesters.

All four Silent Sam defendants were represented by Scott Holmes, the attorney who represented the individuals affiliated with the Communist World Workers Party who tore down a Confederate statue in Durham in 2017.

Holmes was also involved in starting a rumor in 2018 during hearings about the Confederate statue that was toppled in Durham.  Holmes tweeted an unsubstantiated claim that “white supremacists” would be showing up in Durham at noon.

Within one minute of Holmes’ tweet, Durham Councilwoman Jillian Johnson retweeted it.
Protesters, including members of Antifa, showed up and effectively shut down parts of Durham.

White supremacists are marching at the new courthouse in Durham at noon today. https://t.co/yU7cgItqg7

District Court Judge Frederick Battaglia dropped his charges along with over half a dozen others facing similar charges. 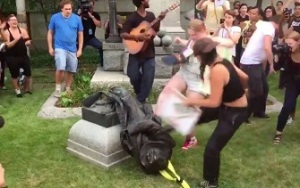 Six months after Battaglia dropped the charges in the Durham statue case, Silent Sam was destroyed.

A.P. Dillon is a freelance journalist and is currently writing at The North State Journal. She resides in the Triangle area of North Carolina. Find her on Twitter: @APDillon_
View all posts by A.P. Dillon →
This entry was posted in A.P. Dillon (LL1885), CRIME, Racial Justice, Social Justice, THE LEFT. Bookmark the permalink.