A Surry County teacher has been arrested on child pornography charges. 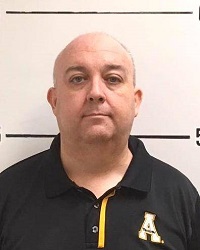 Andy Ray Atkins, age 47, has been charged with five counts of second-degree exploitation of a minor.

A second-degree charge of this nature in North Carolina is possessing and/or transfer of images of a sexual nature involving a minor. In other words, copying or passing around child pornography.

Since child pornography is also a federal crime, other charges will likely follow.

The Sheriff’s press release also said that Atkins was interviewed and at that time law enforcement took his electronic devices. Search warrants for Atkins’ social media accounts were also executed. Charges were then filed as a result of the information gathered from both sources.

Neither law enforcement nor the Surry County School district would comment on whether or not minors in the schools where Atkins worked were involved.

Atkins was fired from his positions at Gentry Middle and Mountain Park Elementary schools on June 28, 2018, according to Surry County Schools director of communications Dr. Tracey Lewis.

A.P. Dillon is a freelance journalist and is currently writing at The North State Journal. She resides in the Triangle area of North Carolina. Find her on Twitter: @APDillon_
View all posts by A.P. Dillon →
This entry was posted in EDUCATION, LL1885, Quiet Epidemic and tagged Andy Ray Atkins, Quiet Epidemic, Surry County Public Schools. Bookmark the permalink.