Ohio Governor John Kasich has 2016 presidential aspirations and was on FOX news this past Sunday, where he towed the pro-Common Core line.  See the video clip.

In the interview on FOX, Kasich accused Conservatives of using Common Core to score political points.   Kasich also runs with the Obama canard:

WASHINGTON — Ohio Gov. John Kasich (R) on Sunday criticized Republicans who have attacked Common Core education standards and said that their opposition has more to do with politics than substance.

Kasich dismissed criticisms of the standards from those like Louisiana Gov. Bobby Jindal (R), who argue that the guidelines will lead the federal government to have more control of the education system in the United States.

Well, Governor Kasich gets it wrong right out of the gate with his claims on who wrote the Common Core.

Common Core was not written by Superintendents and local principals. It was written by a collection of educrats, higher education individuals and testing companies with little to no K-12 classroom experience. 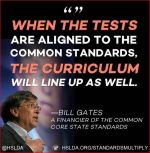 As to Kasich’s claims that curriculum is set by local school boards, he gets that wrong too. Common Core is a set of standards. Standards drive testing, materials and curriculum. What’s more, the Common Core is designed that way.

Let me be clear for Governor Kasich, my child is not a political point and neither is my opposition to Common Core.

It’s not “hysteria” either. My opposition, and that of most opposing Common Core, is fact and experience based.

Dear John Kasich, I oppose Common Core for a myriad of reasons – my child is not “politics”. http://t.co/YRaQfTiTbB #stopcommoncore

I think the irony of Kasich’s own politically driven statements are lost on him.

A.P. Dillon is a freelance journalist and is currently writing at The North State Journal. She resides in the Triangle area of North Carolina. Find her on Twitter: @APDillon_
View all posts by A.P. Dillon →
This entry was posted in A.P. Dillon (LL1885), Common Core, ELECTIONS and tagged Politicizing. Bookmark the permalink.