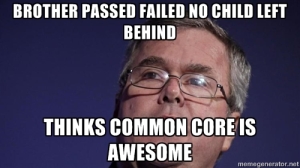 These are the Common Core Weekend Reads for December 21, 2014.

“The George H. W. Bush style of domestic policy that both his sons inherited is one of giving liberal programs half the funding and authority liberals want, but dolloping on so much conservative-branded “accountability” that it can be sold to the right. Poppy pushed “standards-based reform.” W. did No Child Left Behind. And Jeb is the leading GOP advocate for what’s become of Common Core. Whatever the merits, being identified so closely with a Bill-Gates subsidized education scheme hated from the right wing to Louis C.K. will prove costly.” ​
– The Week, Don’t run for president, Jeb.​

Take a chance and step out of the collective

Toxic Testing My Kindergarten Tot – or Daddy Don’t Play That by @StevenSinger3 on the BAT Blog http://t.co/CLlYhNP2xS #whatisschool

A.P. Dillon is a freelance journalist and is currently writing at The North State Journal. She resides in the Triangle area of North Carolina. Find her on Twitter: @APDillon_
View all posts by A.P. Dillon →
This entry was posted in A.P. Dillon (LL1885), Common Core and tagged Weekend Reads. Bookmark the permalink.