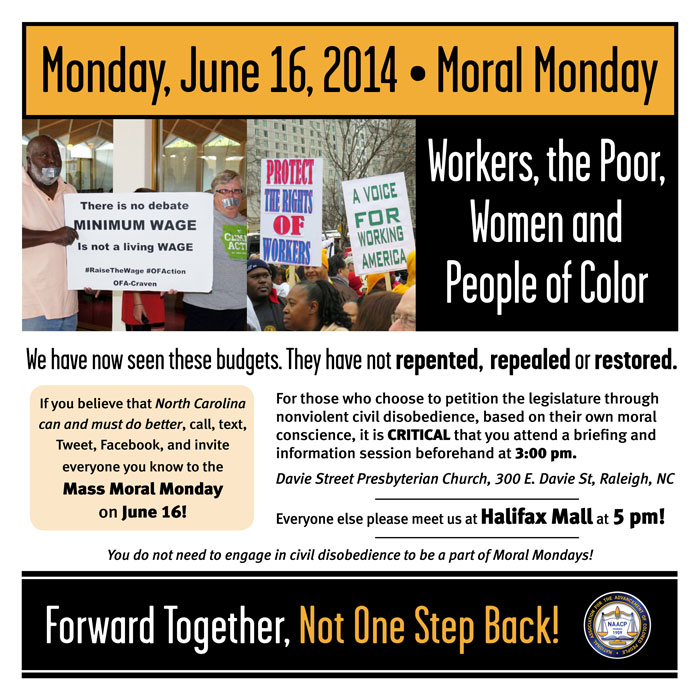 This week’s protest brought to you by Unions. Workers rights are human rights, ya’ll. I’d expect buses. Probably lots of them.

Along with workers, Occupy Monday has added the poor, women AND people of color.

Very ‘big tent’ of them to specify which sections of society are allowed to have a complaint today. The rest of the taxpayers? Not so much. We just foot their bill.

Wonder how many will get arrested given the NC NAACP has sued and an activist Judge has put a temporary restraining order in place on the NC General Assembly rules. Look for those arm-ribbons on the protesters, folks. No one gets arrested at these things that doesn’t want to be.

Stop back by later this afternoon for a link to the Tweets for the 6/16/14 edition. Update: Link to Occupy Monday 6/16/14’s Tweet via Storify will be HERE when available.

Paid to protest. Bused in. Laying the astroturf on thick.

Pre-game has begun. As predicted, buses are headed to Raleigh.

There were more ‘bused in’ tweets like the ones above, like this one here .  I figured there would be, given this is a Union driven Occupy Monday and the big dogs are tweeting in order to create an “imminent disturbance”:

#MoralMonday pushing ahead today, even in the face of bans on “imminent disturbance https://t.co/vqZA7yG6yE

Only together can we build momentum and make real, positive change in lives of all workers in the community #MoralMonday

A.P. Dillon is a freelance journalist and is currently writing at The North State Journal. She resides in the Triangle area of North Carolina. Find her on Twitter: @APDillon_
View all posts by A.P. Dillon →
This entry was posted in LL1885, Moral Monday, NC NAACP, Occupy 2.0, Reverend Barber, Storify, The Articles, Unions and tagged Moral Monday 2014, Occupy Monday, Workers Rights. Bookmark the permalink.