A rumor flew across Facebook and landed in my inbox last night. Apparently, a lady named Leigh Thomas Brown is claiming she’s going to challenge Larry Pittman for his NC House seat in District 82. Will she be the ‘Hair Apparent’? 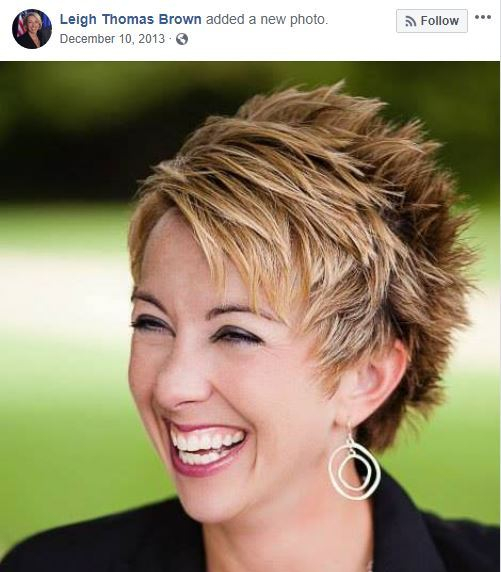 Back to Brown vs. Pittman. Said rumor was confirmed both on Brown’s own Facebook page and at the Independent Tribune:

Brown, who owns the Harrisburg real estate company Leigh Brown & Associates, said she is fed up with legislation coming out of Raleigh that she feels is hampering teachers.

“I am not a politician by trade. With that being said I am putting my pearls in the ring, primarily because I’ve got two children in public schools and I am very, very concerned about what’s happening to public education,” Brown said.

“What’s coming down on the local schools is coming from the legislative level, so I am not going to sit back and fuss about it,” she said. “I will go do everything I can to help get the ship righted.”

One would think this woman was a Moral Monday Democrat from that opening statement, but in fact, the Board of Elections shows her public voting registration record as a Republican. Although, she calls herself a “DemoPublicanRepubliCrat”. 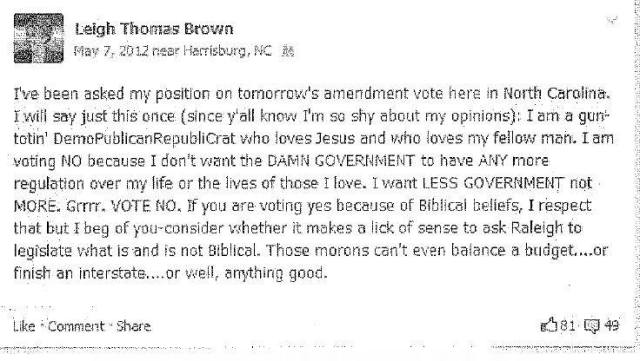 In the Independent Tribune article, Brown also went on to complain about Senator Berger’s Read to Achieve program, which some in recent days have labeled ‘Common Core Lite’.  I haven’t seen her mention it once and yeah, I looked.

Pittman has been a strong supporter of removing Common Core and the voters in his district know that. They’re fighting alongside with him.  Not sure Brown will win any friends by attacking Berger’s signature piece like that, but hey.

Again from the Independent Tribune:

That program “is unnecessarily stressing out our third graders and our third-grade teachers and parents with threats of summer school and holding children back on a test that has not been vetted,” Brown said. “And we’ve got people in a panic. These children are 9 years old. They should be receiving a well-rounded education, not learning how to take some test that nobody really knows what it’s going to look like.”

Brown made no mention of Common Core at all, which is the biggest threat and point of stress in our schools for teachers and students alike.  The article wrapped with this:

She said her background has prepared her to represent Cabarrus County in the General Assembly.

“I’m a renegade, I have an entrepreneurial mindset, and I like to figure out solutions and then go chase them,” she said.

She’s a renegade alright, with a penchant for wacky witch hats and a half-assed run for Governor in 2011 complete with a half-assed twitter account.

She’s also so ‘dedicated to education’ that she couldn’t file a charter school letter on time:

Goodall said he filed the letter on behalf of Leigh Brown. He had talked to Brown about starting a charter school, and Brown was unable to get to Raleigh to file the letter on time, Goodall said.    – Hickory Record

I’m sure that disappointed Sen. Fletcher Hartsell. We’ll see how much when campaign contributions start coming in for Brown. Having pals with big wallets like the Chamber of Commerce helps. Really helps play up how in touch one is with the little people too.

Folks will surely find her donation site… or not. It’s hosted on Piryx? Never heard of it until just now, seriously.

By the way, Brown seems to be a fan of SocialCam.com — watch a few of her rants (before she deletes them once this posts) on achieving ‘bipartisan peace‘, Bank of America Sucks. Safe to say no Bank of America execs will be giving her a donation, eh? No worries, she’s a realtor selling big houses for big commissions, I am sure she can wrangle up some cash on her own. Brown definitely has the money to throw at the Realtor PAC according to the NCBOE, which in turn throws their money right at Kay Hagan.

There’s also the one that was probably as confusing to make as it was to watch about her Mayor and Chick-fil-a.  When it comes to the whole Chick-Fil-A bit, Brown could take some notes from a few friends of mine:

THAT is how you do it.

We’ll see what February brings for Leigh Brown…and her hair.

Realtor responds to liberals: ‘I will advertise wherever I damn well please’. Uh oh. Another demographic out.

Thanks to Carolina Plotthound for linking!

A.P. Dillon is a freelance journalist and is currently writing at The North State Journal. She resides in the Triangle area of North Carolina. Find her on Twitter: @APDillon_
View all posts by A.P. Dillon →
This entry was posted in ELECTIONS, LL1885, POLITICS NC, The Articles and tagged District 82, Larry Pittman, Leigh Thomas Brown, NCGA. Bookmark the permalink.

3 Responses to Possible Pittman Challenger? Is She ‘Hair’ Apparent?