Meanwhile, in North Carolina, the #ShutUppery continues, however it’s not fairing very well.  Greg Flynn and defender John Burns have been silent.

Not so much silence from the “NCBlondes.” Last week Jeanne Bonds went on the Pete Kaliner show and was confronted with her online messaging and branding failures.

While on the show, she unceremoniously threw her ‘Democrat recruiting’ group (led by anonymously run Twitter account @MovingNCForward) under the bus and sprinted away from being tied to them like an Olympic champion.

Apparently, doxing stay at home mom’s didn’t add to her brand. No worries, Bonds and her crew have created a new Twitter account to take up the mantle: @NCblondes.  Don’t worry, no names of who runs that one either.

The same goes for the shiny new NCBlondes acct. Clock is running. State your names & Sign Your Tweets, Anon. Live by your own rules.

I don’t expect their ‘blog’ which has next to nothing on it to ever publish who is affiliated with their group. Why should they live by their own rules? Democrats have one set of rules for the rest of us and another set for themselves.  For a group who vehemently went after yours truly for being anonymous, they certainly don’t mind their own incredible hypocrisy. Like Pete Kaliner says, lack of #SelfAwareness.

Sister Toldjah also has an update on how even a tweet of praise is turned into a hate slam by these people:  Unhinged #NCPOL liberal “#NCGA candidate recruiter” group continues doxing conservatives 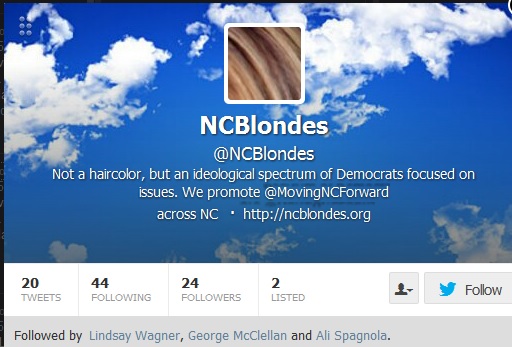 By the way, @MovingNCForward is still leading the #NCBlondes branding effort.  No one ever accused MovingNCForward of being too swift. They walked right into that one:

For those paying attn: MovingNCForward will never be named, but I can be. Also, that acct was silent the whole interview. #TeamPushBack

A.P. Dillon is a reporter currently writing at The North State Journal. She resides in the Triangle area of North Carolina. Find her on Twitter: @APDillon_ Tips: APDillon@Protonmail.com
View all posts by A.P. Dillon →
This entry was posted in A.P. Dillon (LL1885), POLITICS NC, THE LEFT and tagged Pete Kaliner, Shutuppery. Bookmark the permalink.

1 Response to A #ShutUppery Files Update