#MoralMonday and @WRAL Get Owned by Civitas

Over at ABC 11, there’s a story up about the Moral Monday protesters trying to save their credibility in the face of Civitas’ breakdown of their movement.

I was happy to see this site pop up since I’ve been slogging at this movement alone for some time now. I was equally happy to see them call out local media on their biased coverage.

Even ABC11 missed the boat on the arrest coverage it would seem. I left a comment at ABC11 noting that Civitas’ coverage ends on June 10th because that is where the Wake Sheriff’s portal decided to stop posting the arrest information.

So much for the transparency that your tax dollars pay for. Now all you can see is the first few arrested. Here is June 17th, where 84 were allegedly arrested yet the Wake portal displays only 3. WakeMugs.com had two of their pictures up and are linked below:

Up until now, we had no repeat arrests. Jonathan Alan Williams is the first one I’ve found.  He was arrested on the 3rd and again on the 17th.  Bear in mind, the first time he was arrested I believe bars him from entering said area or building again until his first arrest is resolved. I can’t tell if there are more in the June 17th batch since I cannot access the records. Thanks, Wake County!

The Civitas site also has a full database of those arrested up until the Sheriff cut off the portal.  It’s worth wandering through to see who these people are that think they represent you.

WRAL has been shilling for this movement every chance it has gotten and now it seems both Moral Mondays and WRAL have been hoist by their own petard.

Civitas has used their own assertions regarding the make-up attendees via the arrests and pointed it right back at them. They’ve both claimed this movement was representative of North Carolina as a whole, yet the bulk of their protesters are older white liberals and clergy with a sprinkling of AFL-CIO, Occupy, NC Student Power Union, NC Justice Center and other groups. (See: http://www.nccivitas.org/moralmonday/)

Remember  – 78% White and 78% Democrats. This is what WRAL and the NAACP are claiming represents North Carolina.  It would be interesting to see a graph on how many of them were Duke and UNC-Chapel Hill employees or professors as well. 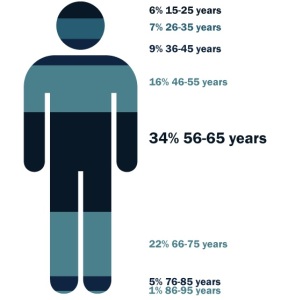 The concentration of them was also noted as being from three of the most Liberal counties in NC: Wake, Orange, and Durham. All three counties went Obama both elections. So did Mecklenburg. Charlotte Observer has a handy map of the 2012 results for your viewing pleasure.

They also claimed this was an NC only movement, yet we saw SEIU 1199’s President and Healthcare director both arrested on June 3rd after multiple buses from NY and NJ dropped off their astroturf.

The Reverend Barber’s pals from the SEIU did their part, now it’s time for the AFL-CIO to try to out turf them:

“On this coming Monday, the the North Carolina State AFL-CIO is making a major push to turn out our members because we believe it is critical that workers voices are heard,” said Mary B. McMillan with NC AFL-CIO. “The list of injustices against workers is long, gutting protections in the state personnel act, endangering teacher tenure, denying dues deductions to municipal employees.” – ABC11

By the way, ABC 11, you could use a copy editor. “The” is repeated twice in the first sentence and I did not correct it for this story.

The AFL-CIO NC site has this announcement:

For Labor, Women, and Economic Justice

Let’s make Monday, June 24th the day the halls of the North Carolina legislative building echoed with the singing of “Solidarity Forever!” for on this last Moral Monday in June our union will make us strong! WEAR UNION SHIRTS!

Remember that you do not have to take part in civil disobedience, but your presence and passion and determination to wake the state and the nation to what’s happening in North Carolina – that alone will mean the world to those who do make that choice and to everyone else who will be there in support. If you are at all able, join us in making Monday moral and union strong!

Join the Moral Monday 8 event and connect with others on Facebook.

ABC 11 covered a press conference on Friday where MaryBe McMillan said, “the North Carolina State AFL-CIO is making a major push to turn out our members because we believe it is critical that workers voices are heard.”

And this video – where Reverend Barber hits every issue in his speech with the same note. Of course, that note is ‘That’s raaaacist!’ and the video has this sorrowful music in the background.

I think I hurt myself rolling my eyes as they starting rolling into the end of it with the chanting and ‘attitudes change’ bit.  Irony is out getting drunk with hypocrisy somewhere. Here’s the video:

4 Responses to #MoralMonday and @WRAL Get Owned by Civitas