The only reason I knew the FLOTUS was in Raleigh was a report by ABC-11 that caught my eye. The big story today was Chik-Fil-A and the huge support shown to them with lines of cars and people all day long wherever the chain has stores.

Only 2,200 showed up for her big FORWARD stump speech in Greensboro. Kind of sad to be upstaged by chicken. Maybe that was a good thing though, given her sporting some prison striped frock. The other outfit was a mustard yellow and black print number – not unlike the other drapery style dresses we’ve seen on her so often. But I digress… 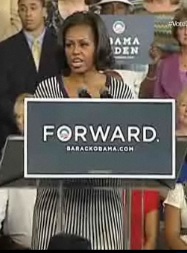 The FLOTUS was well taken care of in Raleigh though, since Lt. Governor Walter Dalton was there and pretty excited.

We’ll have to take his word there were a lot of people and a lot of enthusiasm since no the press was kept out.

According to the video that accompanies the story, there were about 400 people there (again, we don’t know for sure since press weren’t let inside) and that it cost anywhere between $250 to $50,000 a plate.

Here’s a snippet of ABC 11’s report, emphasis mine:

She spoke at a fundraiser at the Raleigh Marriott City Center.

“A lot of people and a lot of enthusiasm,” said Lt. Gov. Walter Dalton.

Dalton’s words were the only clue about the atmosphere inside the event.

There were barriers in all directions at the event. The police and Secret Service kept the media a good distance from the private fundraiser.

“There couldn’t be anybody else more passionate than her,” said supporter Ann Green.

Michelle Obama’s passion was on full display just minutes earlier when she made an unannounced stop at her husband’s campaign headquarters in downtown Raleigh. Hugs and handshakes greeted her.

“The overall message is that Barack Obama is doing good things for our country,” said Minority Whip Rep. Deborah Ross, of Wake County.

Earlier in the day, the first lady stumped at UNC Greensboro where she spoke to 2,200 supporters. She made the call to get out the vote.

A.P. Dillon is a freelance journalist and is currently writing at The North State Journal. She resides in the Triangle area of North Carolina. Find her on Twitter: @APDillon_
View all posts by A.P. Dillon →
This entry was posted in Forward, Michelle Obama, POLITICS NC, The Articles and tagged Campaign 2012, Forward, Greensboro, michelle obama, Obama Fundraiser, raleigh. Bookmark the permalink.