How dare anyone make fun of or criticize Barack Obama? Leave Barack alone!

If I could turn back time… If I could find a wayyyyyy… I’d ask Sonny if he knew Cher was such a bigot. Also, I’d tell her to bone up on her typing skills for Twitter in the future. 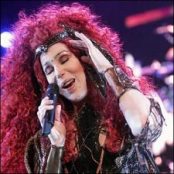 “If ROMNEY gets elected I don’t know if i can breathe same air as Him & his Right Wing Racist Homophobic Women Hating Tea Bagger Masters,” the singer tweeted.

Jeez, Cher. You sure can wax political. Speaking of wax, you’re looking rather rough these days. Time for more plastic surgery? The wonders that makeup eventually can’t do, huh?

“Don’t get me started on the Republicans,” Sheen said. 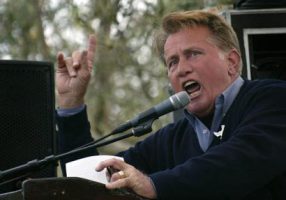 “They’re going to jump on all the things he didn’t do, but I think he’ll beat the hell out of them, frankly. When you put him and [presumptive Republican presidential nominee Mitt] Romney together you’ll see the difference between a man living an honest life and a hustling politician.”

Marty? Have you been raiding Charlie’s stash again or is this part of some actor prep for a new Sorkin failboat series?

Marty apparently hasn’t been paying attention to what President Crony Capitalism has been doing nor the lie upon lie this President has told this nation.

You mean like showing us all his transcripts? Taking nearly 2 years to produce a birth certificate? Making sure none of his papers from when he was Senator survived? Telling Reverend Wright to ‘shut up’ until after the election? Mr. Sheen, stand with your feet shoulder length apart and wiggle your arse like mad until your head comes loose from it.

Let’s warm up the racism card. Al “Resist We Much” Sharpton is a permanent card-carrying member of the “That’s raaaaacist” club. He’s really outdone himself this time, claiming that Republicans Advocate Genocide:

“It seems like they [Republicans] act as though some wiping out of people, some of the right wing, is all right. It’s not all right to do to any innocent people.

If you had war and people, that’s one thing. But to wipe out innocent people just because of who they are, like what was done in Hitler’s Germany or what was done to Native Americans, is not justified.”

Racism Obsessed Janeane Garofalo goes on another double standard laced tirade on her favorite channel, Current TV. I think it was an effort to help kick off the new show Joy Behar has on Current TV now after CNN punted her.  Current TV is that one table at a wedding where you stick all your embarrassing relatives.

To Garofalo, anyone not agreeing with the President is a racist. Of course.

BEHAR: I’ve have noticed there is a certain amount of disrespect for President Obama that I haven’t seen before.
GAROFALO: Well, he is black.
BEHAR: Is that the reason?
GAROFALO:  For the racists in the Republican Party, the conservative movement and the racists in the country, yes.

“Dan Quayle was Sarah Palin with tits long before [they had her],” he joked, “John McCain did not invent the bimbo running mate.” Tweeted Maher.

Bill can’t lay off the tweets. He calls them ‘brain farts‘ that shouldn’t be taken seriously. I guess that’s why the whole Obama administration is on Twitter then, Bill.

Anyway, Bill thinks diverges from Garofalo’s “that’s raaaaacist” message and says those not agreeing with the President economically are committing treason.

Is it treason to purposefully block any help for the economy so voters blame the president and turn to the other party? Just asking. 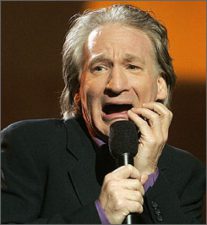 Now ask him about American Exceptionalism:

“We need to drop the whole notion of American Exceptionalism“

How quickly he changed his tune though.

The ‘big’ comment he made recently was on the Fast and Furious. To me, that was the verbal equivalent of when Maher showed up on Halloween dressed as the recently deceased Crocodile Hunter, Steve Irwin.  Republicans don’t care about dead Mexicans:

“[House oversight committee Chairman] Darrell Issa says this is a giant scandal,” Maher said. “I’ve heard on Fox News this week it’s worse than Watergate because 200 Mexicans have died. First of all, let me just say Republicans don’t care about dead Mexicans, A. And B — I think those 200 dead Mexicans would be dead even if we hadn’t sold them guns. They would have gotten the guns somewhere else. So is it really a scandal?”

Luckily, ReasonTV’s Nick Gillespie was on for the above interlude and quickly put Maher in his place. Note how Maddow immediately tries to delegitimize it by making reference to Andrew Breitbart and James O’Keefe without actually mentioning their names. Watch the whole thing:

A.P. Dillon is a freelance journalist and is currently writing at The North State Journal. She resides in the Triangle area of North Carolina. Find her on Twitter: @APDillon_
View all posts by A.P. Dillon →
This entry was posted in New Civility, Say What? and tagged Al Sharpton, bill maher, Cher, Janeane Garafalo, Martin Sheen, Useful Idiots. Bookmark the permalink.

1 Response to Say What?: Unhinged Edition