This edition is “Obama heavy” given recent events.

From remarks at the presser held with President Calderon and Prime Minister Harper in the Rose Garden this past week, starting out with American exceptionalism:

“It’s worth noting that I first arrived on the national stage with a speech at the Democratic Convention that was entirely about American exceptionalism, and that my entire career has been a testimony to American exceptionalism.  But I will cut folks some slack for now because they’re still trying to get their nomination.”

He’s so full of it his eyes are brown. This President has had nothing if not contempt for the notion of American Exceptionalism.

Then he moved on to health care:

“With respect to health care, I’m actually — continue to be confident that the Supreme Court will uphold the law.  And the reason is that, in accordance with precedent out there, it’s constitutional.

That’s not just my opinion, by the way; that’s the opinion of legal experts across the ideological spectrum, including two very conservative appellate court justices that said this wasn’t even a close case.”  No, that is just your opinion.  What precedent? There is no precedent for this monstrosity of a law? Two judges constitute a vast majority? I can hear him yelling inside, “Remain Calm! All is Well!“

Then came the home run – threatening and insulting the Supreme Court:

“Ultimately, I’m confident that the Supreme Court will not take what would be an unprecedented, extraordinary step of overturning a law that was passed by a strong majority of a democratically elected Congress.  And I’d just remind conservative commentators that for years what we’ve heard is, the biggest problem on the bench was judicial activism or a lack of judicial restraint — that an unelected group of people would somehow overturn a duly constituted and passed law.  Well, this is a good example.  And I’m pretty confident that this Court will recognize that and not take that step.”

Wow. What does he think the job of the Supreme Court is, I wonder?  Talk about arrogance combined with ignorance.

He also claims “a strong majority of a democratically elected Congress,” passed it.  Uh, no…it barely was passed and many now wish they could take their votes back.  He’s got Carney tying himself in knots trying to back track and cover his ass on it now.

This week, he also dictated to the media how to do their jobs, just in case they were confused on how to carry water for him:

“This bears on your reporting,” President Obama said to journalists. “I think that there is oftentimes the impulse to suggest that if the two parties are disagreeing then they’re equally at fault and the truth lies somewhere in the middle. And an equivalence is presented which I think reinforces peoples’ cynicism about Washington in general. This is not one of those situations where there’s an equivalency.”

“As all of you are doing your reporting, I think it’s important to remember that the positions that I am taking now on the budget and a host of other issues. if we had been having this discussion 20 years ago or even 15 years ago … would’ve been considered squarely centrist positions,” Obama said a few moments later.

Any questions? Just keep faking stuff and reporting half the story. Now run along like good media soldiers and do his bidding! Change it up a bit too, Obama can’t be bothered to change his tired, old rhetoric.

Obama said that Republicans have “one message and that is, we’re going to make sure that we cut people’s taxes even more — so that by every objective measure our deficit is worse and we will slash government investments that have made this country great,” he argued,

Wait, what? Government is what makes American great? I know several generations of Americans that would beg to differ – it’s our people and our freedoms. Wasn’t he just touting being Mr. American exceptionalism just a few quotes ago?

Obama passes the Far Left ‘Go’ and distributes $200 from your pocket to 10 other people’s:

He wants to be his sister’s keeper, eh? Well, I think we owe it to him to give him the full Ruprecht treatment.

The Rest of the Peanut Gallery:

Someone let Joe out without his minders again:

“I’ve watched him make decisions that would make another man or woman’s hair curl,” Biden told the crowd of 150 inside the Italian Community Center in Milwaukee, according to a pool reporter on scene.

“I think I can say … no president and I would argue in the 20th century and including now the 21st century, has had as many serious problems which are cases of first-instance laid on his table,” Biden said. “Franklin Roosevelt faced more dire consequences, but in a bizarre way it was more straightforward.”

Ah Yes, Obama has faced such harrowing decisions, all of which include spending our money like it grows on trees.

“The president and I think that, it’s already the law, that anybody, any quote child, dependent, who has a pre-existing condition should automatically be covered by their parents’ insurance policy and we believe that if every insurance company has to do it, it’s no disadvantage to one insurance company verses the other,” said Biden at an event on college affordability in Norfolk, Va.

“Well, our friends, Senator Santorum and Senator Romney and others, they don’t think the government should dictate that.”

You got that right, Joe! Thanks!

“Pregnancy is a pre-existing condition. Didn’t know that did you? Gee, the way Joe tells it, sounds like having a baby is a disease. We’re just walking around like Perdue oven roasters waiting for our timer to pop, is that it?

“You can get out there with your parents. You guys can knock on doors. I had one young lady who brought me a petition — she’s already working. You can convince wrong people. Sometimes we don’t listen to ourselves, but we will listen to our children.”

Yep, she believes the children are her future. Teach them well and let them led her way…but don’t you dare bring her own kids into it!  Like I’m letting my kids listen to a woman who sent her 13-year-old daughter to a country under State Department advisory for ‘spring break. Hey, Mooch! Leave those kids alone!

This quote from Van Jones speaks for itself:

Maureen Dowd is better than all of us, including the Supreme Court:

“It has squandered even the semi-illusion that it is the unbiased, honest guardian of the Constitution. It is run by hacks dressed up in black robes.”

She wrote that in the NY Times. Shocker, I know. Ironic she uses the term ‘hacks’ since a biased and liberal hack is precisely what she herself is. I bet a conversation with her would go like this.

I can’t come up with anything funny about this race-baiting clown said and I am not reposting it, so here’s a bunny with a pancake on its head. The jackwagon has been raving all over television for blacks to put on hoodies in ‘racial solidarity’ yet I cannot find a single image of him wearing one himself. Fan those flames! It’s time for a flashback:

The Mental Midgets of MSNBC 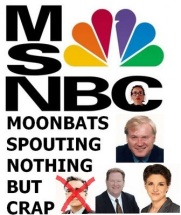 The Morning Joe Crew decides The Hunger Games (PG-13) is inappropriate for Mitt Romney’s kids to see, but no comment on the multiple times Obama has dragged his kids onto the Nation stage to do his bidding or on letting a 13-year-old spring break in a State Dept. warning listed country – alone. This clip has much more idiocy than that packed in it.

“I was totally unprepared because of the way people talked.” The anchor insisted that “intellectually,” he knew it could be a problem, but “I never heard it discussed politically as a prospect, that they actually might get his major achievement just ripped off the books.”

The Otto Award for Stupidity goes to Meghan McCain – who else!

Anyone who has read or seen the ‘Hunger Games’ will likely injure their forehead (from slamming it on their desk in disgust) after reading this quote:

“Obviously I haven’t seen The Hunger Games yet, but I have read the books. I love a young adult story that celebrates a woman fighting and being independent, rather than just marrying the man being the whole point of the movie (like Twilight). The film is full of strong female characters like Effie, played by Elizabeth Banks.”