From Reuters via Yahoo!:

Buffett to Republicans: if you pay, so will I

WASHINGTON/BOSTON (Reuters) – Warren Buffett is willing to put his money where his mouth is, if only congressional Republicans would join him.

The American billionaire investor, in the new issue of Time magazine, says he would donate $1 to paying down the national debt for every dollar donated by a Republican in Congress. The only exception is Senate Republican leader Mitch McConnell – for whom Buffett said he would go $3-to-$1.

The idea stems from a New York Times opinion piece Buffett wrote last August in which he said the rich ought to pay more taxes. It sparked an instant controversy, with some Washington conservatives calling on the 81-year-old “Oracle of Omaha” to voluntarily pay extra. 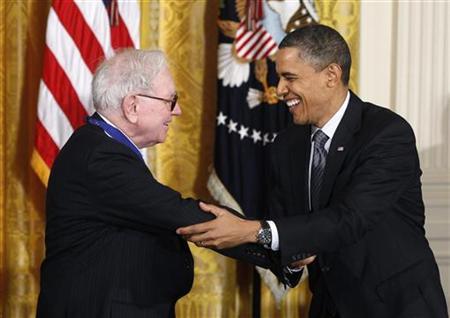 Please stop your condescending, transparent gimmicks and just pay your outstanding taxes. You look like an ass. If you want to pay more be our guest, but stop shoveling that crap about the wealthy do not pay enough and should pay more. At this point, it won’t make a dent thanks to the spending spree your man Obama went on. Also, your attempted jab at Republicans here is a bit misplaced since the entire country now knows that the 7 of the 10 richest members of Congress are in fact Democrats. You can read more about the top 50 wealthiest after those top 10 here.

P.S. The rest of America has had it with the disingenuous bit about your secretary as well. Just pay what you owe just like us little people do. And you keep the social justice hope and class warfare change.

A.P. Dillon is a freelance journalist and is currently writing at The North State Journal. She resides in the Triangle area of North Carolina. Find her on Twitter: @APDillon_
View all posts by A.P. Dillon →
This entry was posted in Err What?, Obama, The Articles and tagged Buffett Rule, lies, Taxes, Warren Buffett. Bookmark the permalink.
%d bloggers like this: