They Know So Much That Isn’t So.

Awww… Is Matt mad that Obama didn’t go full Socialist and push our country over the brink? Don’t worry, he’s trying Matt! He has another year still!

From The Huffington Post piece, which is rife with all of Damon’s recent temper tantrums:

“I’ve talked to a lot of people who worked for Obama at the grassroots level. One of them said to me, ‘Never again. I will never be fooled again by a politician,'” Damon tells the magazine. “You know, a one-term president with some balls who actually got stuff done would have been, in the long run of the country, much better.”

It looks like Matt agrees with GQ’s assessment of Obama’s influence level. It would appear that Barry doesn’t think much of your performance either, so stop being a weiner, eh?

“The wealthy are paying less than they paid at any time else, certainly in my lifetime, and probably in the last century,” Damon told a reporter at the same event. “I don’t know what we were paying in the roaring 20’s; it’s criminal that so little is asked of people who are getting so much. I don’t mind paying more. I really don’t mind paying more taxes. I’d rather pay for taxes than cut ‘Reading is Fundamental’ or Head Start or some of these programs that are really helping kids. This is the greatest country in the world; is it really that much worse if you pay 6% more in taxes? Give me a break. Look at what you get for it: you get to be American.”

Well Good Will Hunting, it would appear history, economics and facts aren’t something you learned in school.  Michelle Malkin schooled him pretty well on this, but I’d like to add a bit more.

The United States did not use an income tax until 1861. It was used as a temporary measure to help finance the Civil War. That tax was repealed in 1871. No income tax was levied again until sometime during 1913. 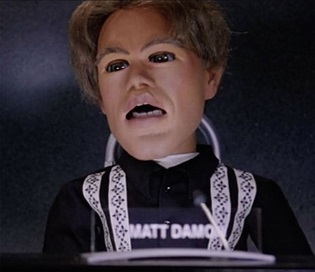 Not much happened for a term or two.

Even Carter didn’t move the rate one way or the other that much,  but he did raise the roof on Social Security taxes.

Reagan cut them again and in a big way – top marginal individual income tax rate fell from 70.1% to 28.4%. We then saw the biggest boom in our economy ever seen and over 35 million jobs added, but remember there was also raising of some taxes by Reagan and the Democrat held Congress in 1982. Reagan also cut Federal spending from 4% under Carter to 2.5%.

So… What since then has continued to increase and is fueling the need to raise taxes? Well, it’s the spending, stupid.

A.P. Dillon is a freelance journalist and is currently writing at The North State Journal. She resides in the Triangle area of North Carolina. Find her on Twitter: @APDillon_
View all posts by A.P. Dillon →
This entry was posted in Obama, The Articles and tagged Matt Damon, Obama, Stupid Celebs, Tax Rates. Bookmark the permalink.
%d bloggers like this: